Opening the mission briefing pack for May, it’s mostly good news. We can now set up roadblocks to prevent the spread of the Faded when outbreaks occur, though these do make travel for player characters more difficult as well. We also have a new character, the Colonel, who can kill zombies, albeit slowly, and who isn’t hampered by the roadblocks. There is a small increase in the infection rate of the Faded – now, whenever a player draws a city card that corresponds to a Faded city, one Faded figure gets added to the relevant city.

The initial allocation of disease cubes seemed fairly balanced, though with perhaps slightly more in the black region. We selected our characters – Susan continued to play as Wei, the Dispatcher, and Karen as Ewan, the Quarantine Specialist. I chose Derek, the Operations Expert, and Gammidgy selected the Colonel, who we have named K*D (pronounced “Custard”) and we gave him a relationship of “Rival” to Derek, which means that when one of them plays or discards a city card, the other can immediately pick it back up at a cost of any two city cards.

The game got off to a fairly unlucky start, as an epidemic card was drawn on the very first turn, and the Kinshasa card popped up again, causing an outbreak before we’d even gone halfway around the table. 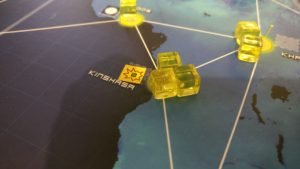 We were feeling stressed already. We decided to slap some military bases down in Cairo and Tokyo so that we’d be able to make the best use out of the Colonel’s abilities.

An outbreak in Mexico City came along soon after. Both the yellow and black regions were starting to look a bit troubling, and to be honest the blue disease wasn’t looking so controllable either. However, we were gradually managing to get the colour sets together, and by the time the second epidemic card came up, we nearly had a full set of black cards in Ewan’s hand.

The cure for black finally arrived, and we all breathed a sigh of relief. We started to feel a shred of confidence, though we all knew deep down that an epidemic was due soon. 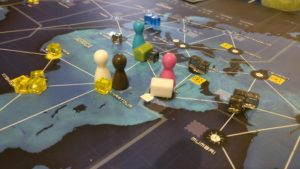 When the epidemic eventually landed, it was in Sydney. So far in the game, we’d been mostly ignoring the Faded cities, as they hadn’t been giving us much trouble, but suddenly we started to pay attention. An outbreak in Sydney could lead to Los Angeles turning to the green side 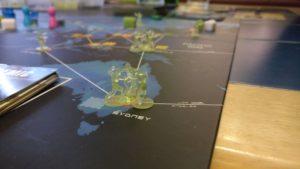 Little green guys in Sydney having a party

This was soon followed by outbreaks in Paris and Montreal, and nearly every blue city on the board had at least one cube on it. 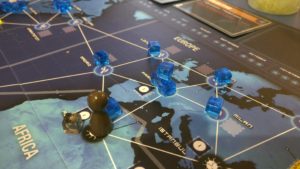 Ewan picked up a scar when a Faded appeared unannounced in Tokyo. They now have to discard a city card whenever they leave a city with 3 cubes of the same colour. 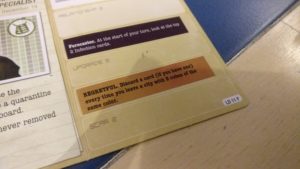 Gammidgy realised that he’d been underutilising the Colonel’s special abilities, so started making a beeline for the hotbed of Faded activity. The inevitable outbreak in Sydney occurred before anyone had a chance to do anything about it, and Los Angeles is now the latest victim to the zombie virus. However, we have been working on the cures – the relationship between Wei and Derek has been especially useful at funnelling city cards, and Derek has been running around the globe lobbing blue city cards over the fence into Wei’s hands. With blue cured, and black eliminated, all that remains is to cure yellow and complete one more optional objective, and the game is ours. The most attainable of the optional objectives now seems to be the one to get military bases in all six regions – we already have three covered, so three more shouldn’t be too hard.

The Colonel was then hit with a huge spate of bad luck. He ended his turn in Taipei, an ostensibly Faded city but with no Faded figures in it, with the intention of then setting out on his next turn to do some good. But an epidemic card turned up, and you guessed it, it was in Taipei. But we were close to winning – Wei had the 5 yellow city cards they needed to find the cure, and we only needed to place two more military bases for the optional objective. We were potentially a mere two or three turns away from victory! 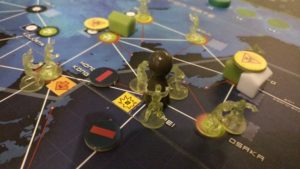 But eventually the weight of the Faded got too much to handle. A cascading outbreak originating in Manila meant that outbreak marker once again blasted off the bottom of the track, and the game was over. We now have two cities with “Fallen” status in that region, and to be honest at this point in the campaign it feels like a miracle that it’s only those two.

For our game-end upgrades, we picked the following two:

It was getting late, so we decided to wait until our next playing session to start our second attempt at May.

We have now lost three games in a row. We had fun, but it would be even more fun if we were able to win sometimes. Are we playing this game right? It seems very hard. Maybe we’ve misunderstood the rules. Maybe it’s supposed to be a fiendishly punishing game where losing repeatedly is the expectation.