It’s all gone a bit bonkers. First off, the AFBeerClub box this month contained nine beers, none of which I’ve had before. This already gives me a lot of reviews to work my way through. Couple that with the fact that Karen and I have been on holiday in the North of England, which has exposed me to opportunities to try a few more alcohol-free beers that I haven’t had before, and I’m now almost 100% certain that I’m not going to have caught up on the review backlog before the next AFBeerClub box arrives. Which means that this month’s will spill over into next month’s, and I’ll start losing track of which ones came in which month’s box, and it’s going to be utter chaos. Chaos. What fun we’ll have. 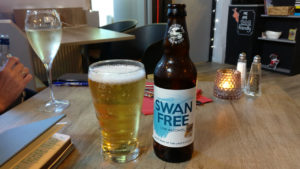 The website claims “handcrafted in the English Lake District” but the brewery is actually in Kendal, so if you’ll permit me a little pedantry, the claim is actually fallacious. Karen and I were struggling to book a table for a Sunday evening in Grasmere, and ended up in a slightly shabby (and not in a cute way) bistro. When we walked in the door, everyone was staring at the wall-mounted television above our heads, blaring out the football. Oh shit, it’s a sports bar, we thought. Leaving seemed like a risky proposition, as there were so few other options. The menu didn’t look too good either – the food options were things like chicken tikka massala, and the only alcohol-free beer was (pinches nose) Becks Blue. But things took a turn for the better when I investigated the bottles of locally-brewed beer on the counter, and one turned out to be an alcohol-free one! We also discovered today’s special was cumberland sausage and mash, which made us a little happier (though the mash turned out to be something that has passed through many stages of life since it was last a potato).

The beer is quite pale, with a head that lingers nicely. The smell is fresh but does have a little hint of something peculiar that reminded me of a swimming pool. The flavour is excellent though, nice and refreshing and crisp and fairly well hopped. There’s always something satisfying about going on holiday and drinking a local beer, and it’s something I’ve sadly had very little opportunity to enjoy in recent years. 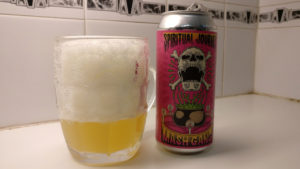 This one poured with a crazy head. I initially only managed to get the glass about 1/4 full, and took a photo for laughs, with the intention of taking another one for the blog post. Unfortunately it looks like the second didn’t get saved, so the first one is what you get.

The beer looks pale and cloudy with a very sour smell. I found the flavour to be quite harsh and a bit fusty. Karen wants to get more involved in this beer reviewing malarkey, so she took a sip too, made “the face”, and then gave me her assessment, which is that it is a bit “herby”. 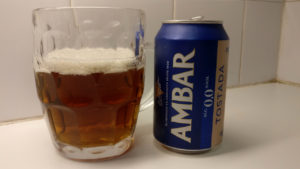 This is a dark and malty beer, reminiscent of some of the malty lagers I’ve had like the San Miguel and the Brooklyn Special Effects. It was perfectly drinkable, but felt a little lacking in presence, as if there might be a great beer in there but it had been watered down by 50%. Karen’s thoughts: “it has a tartness; a little tang.” 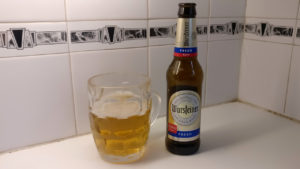 This has a pale to medium golden colour, and smells like a robust lightly-malted German pilsner should. It’s slightly fizzier in the mouth than anticipated, and the flavour has a little biscuitiness to it, but on the whole it delivers what it promises. Karen says “that’s quite beery, isn’t it?” Do you think she might be losing interest in this whole beer-reviewing malarkey already?