As is often the case these days, all of these beers come from this month’s AFBeerClub box. 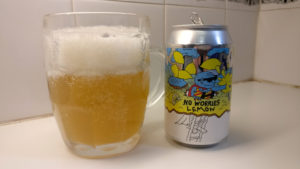 The “No Worries” range seem to be a recurring theme – this is the third that I’ve tried, and both the default “No Worries” and the pineapple variant scored max points. This beer poured with a colossal head, it is quite cloudy, and has a very tangy smell that is almost exactly like a good robust traditional lemonade. The flavour is reasonably well balanced between a hoppy IPA and a lemonade, which is expertly done, however I’m unconvinced that this works as a concept. Even in tiny quantities, the lemon is bold and dominating. I feel like the end result is a drink that will be unsatisfying to those who were hoping for the refreshingness of a good lemonade, and unsatisfying to those who were hoping for the reassuringness of a hearty beer. 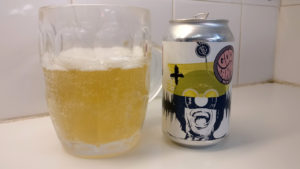 Difficult can to take a photo of, as the artwork wraps around it so much. The beer is very pale with a good head, and smells a bit like lemonade, though unlike the No Worries, it’s the sort of lemonade that you get in pubs that doesn’t actually bear any resemblance to lemons but you call it lemonade because that’s what you’ve been told it’s called. The flavour is like a sort of grapefruit/elderflower mix, quite delicate but also sharp. It’s not really a beer, more of a quirky soft drink, and it’s making me realise that perhaps I need to make some changes to how I do these reviews, because I seem to be spending an awful lot of time writing beer reviews for things that are beers inasmuch as tomatoes are fruit. 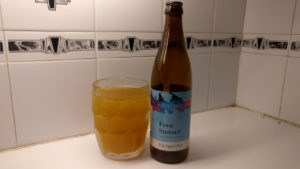 This drink is nuclear orange and its head dissipated almost immediately, though it continued to bubble away happily. It had a very tangy smell that reminded me somewhat of the Nyponsoppa, which was a bit of a concern. Thankfully, this drink is nowhere near as obnoxious, and is actually a fairly pleasant concoction that blends mango and coconut. At no point did I even feel remotely like I was drinking a beer, and a 330ml can (rather than an entire pint) would have been plenty.