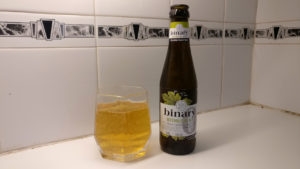 I dropped into a new shop in town and picked this up on a whim as it was their only alcohol-free beer. I talked to the guy behind the counter, and to be honest it didn’t really sound like my thing, but in the interests of satisfying my own curiosity, I bought it anyway.

This has a deep golden colour and is thin, clear and bubbly. On the bottle it claims to be “the wine lover’s beer” and it does smell very much like white wine, with a grapefruity aspect too. I wasn’t terribly enamoured of the taste either – to be honest it tastes like a fairly musty and cheap white wine, with perhaps a slight beerishness mixed in there, albeit very subtly. 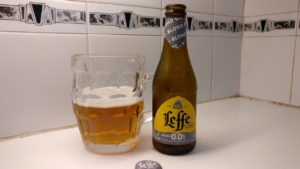 Heading over for our regular Pandemic Legacy sesh, I stopped off at the supermarket to stock up. I saw this on the shelves, which I’ve never had before! I was fairly optimistic that this would be a good beer, because it’s Leffe.

It has a deep colour and the slightest of slight heads. The smell is good, very well balanced, with hops and malt and a bit of biscuitiness. Karen had a little sip of this one and remarked that it “tastes like a haystack” and I’m not sure what to make of that. For me, I was very pleased with this beer, it has a nice full flavour and a good mouthfeel.

Lowtide “Are Wheat There Yet” 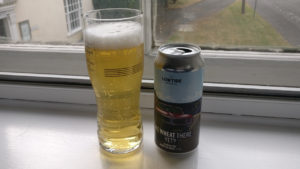 This (and the next two beers) were purchased from the Twelve Ounce Bottle Shop in Crouch End, and consumed in a Best Western hotel in Suffolk.

This beer is clear and pale, with a nice head plus a steady bubbling in the glass. The smell is fairly sour and hoppy, and the flavour had a somewhat surprising savoury nature to it. Karen took a sip, as she so often does, and said pretty much exactly the same thing, so we were both pleased about that. There is some coriander in it, which could be a large contributing factor. 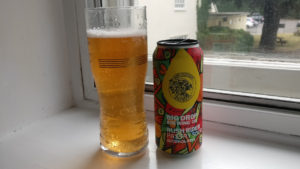 This has a pinkish colour and very little head. The smell is of raspberry and vanilla, which ironically enough matches the shower gel that I’m using at the moment. This could get confusing if I don’t keep my wits about me. Karen was very enamoured of this drink – she said “that is a fruity taste – peaches or strawberries – and I would drink that!” For me, sadly it falls into the category of something that’s fairly nice as a soft drink, but doesn’t satisfy my desire for a beer. 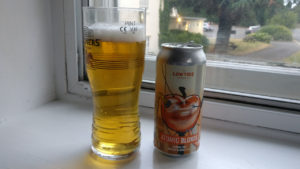 By now it was getting late in the evening and the light was poor, so I was worried that the photo wouldn’t come out very well. The head on this one faded very quickly. Karen took a sip of this one and exclaimed “Basil!” which I couldn’t tell whether it was a reference to the flavour of the drink, or a cutting remark upon the nature of the hotel that we were staying in.