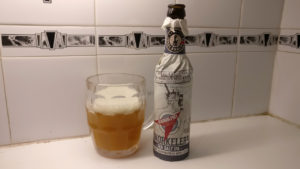 This is a sea salt IPA which smells nice and fresh, and fairly delicately hopped. It has an intersesting appearance – very cloudy, with many large white floating particles. They didn’t sink to the bottom like sediment, but seemed to be a deliberate feature. The beer has some head, but this dropped away quite quickly. The flavour is very bitter, and caused Karen to make The Face, which is something that we see less and less of these days. She complained for a protracted period of time afterwards – ah, it’s just like the old days. The saltiness is definitely present, but it’s a coarse sort of saltiness. I felt like I was drinking a fishing village. Borderline on the scoring for this one, but I’m feeling generous. 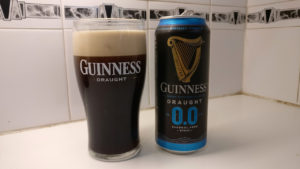 I’ve been waiting for a long time for this one. This absolutely looks and smells the part. The colour and consistency are an exact match for the alcoholic version. As far as flavour is concerned, it’s very close but not quite identical. Compared to the alcoholic version, I detected a very slight sour quality. On the whole though, I declare this a huge success. 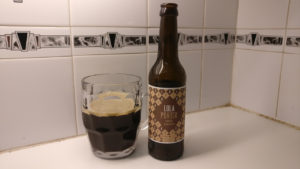 This is a coffee porter, and is a type of beer that always gets my hopes up, because when done well, it can result in a really complex and hearty flavour. The previous beer I tried from this brewery contained a lot of sediment, so I was prepared for that this time, and poured it slowly and carefully, and left the last little dribble in the bottle as it did look like there might be some sediment coming through with this one too. It pours with very little head, but it has a promising consistency – not watery at all. The smell is dark and rich, and the flavour is equally superb – dense and invigorating, with perhaps a faint whisper of something sour. It’s nearly, but not quite, on a par with the Svart/Hvit, which as you know, is an absolutely gem and one of my favourite alcohol-free beers ever.