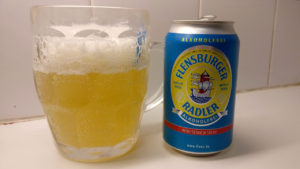 I can’t read much of this can, as it’s all in German, but I can recognise a picture of a lemon when I see one. There was a big hit of lemon smell when cracking open this can, and a very voluminant head which settled down fairly quickly. I passed it to Karen for her thoughts, and she thought that the lemoniness was subtle, but I disagree. It’s very lemony, but with enough beeriness that it manages to stay just short of the bounding line where I feel like I’m just drinking lemonade. 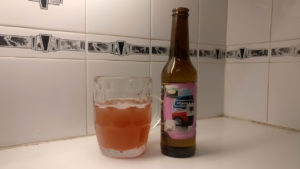 This is a raspberry Berliner Weisse, and is unsurprisingly very pink. The head dropped away very quickly. It’s a very tangy and raspberry-forward drink, without much beery quality at all really. Not bad, for what it is, I suppose. 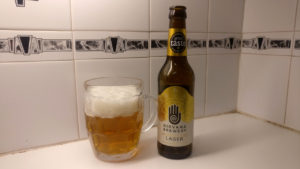 You can see the thick head in the photo here. This one smells very pungent and malty. It has a good flavour too – a bit sweet, but not so far as to be sickly. I offered it to Karen for a sip but she declined, as she was carrying a stinking cold at the time and didn’t want to share it with me. I ended up getting it anyway, of course. 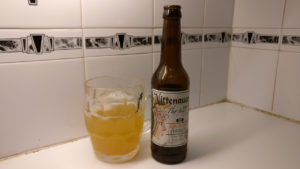 I took a few days off of drinking beer to nurse my cold. I often find that when I have a cold, my sense of smell is dulled, which also impacts on my ability to enjoy food and drink. So, it seemed like a waste of time to attempt to review beers when I couldn’t really appreciate them. As my cold receded, I picked back up with this. This is an odd little beer with some orange and coriander in it. The head faded very quickly indeed, and by the time I was ready to take a photo there was basically none left. As I poured the beer, dollops of sediment tumbled out – there had been nothing on the label to warn me about this, so I was stuck with it.

This is a very sour beer. Karen says it tastes a bit like perfumey beer. It reminded me a bit of the Atomic Blonde – it’s sour, but in a sort of undignified way, like stomach acid. As I got further down the glass, it was harder and harder to avoid the whirling sediment, so I ended up tipping the tail end away, but to be honest this was no huge loss.

Coming up in the next instalment of this series will be a beer that I’ve been particularly looking forward to – Guinness 0.0!