As is so often the case, I have this month’s AFBeerClub box to thank for some of these beers. I’m struggling to keep up with the reviews, and have even started entertaining the notion of only writing reviews for selected beers. But for now, let’s try to keep doing all of them. 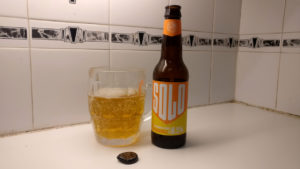 This beer has a delightful golden colour, and a head that dissipates very quickly leaving a steady rolling bubblage as it carbonates away to itself for an indeterminate period. It has a lovely smell, with a precisely delicate hint of peach. That said, all of that subtlety gets lost in the mouth, and it just sits there fizzing away on your tongue like popping candy. 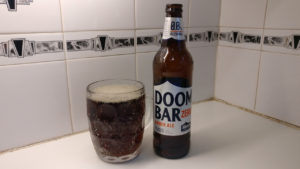 When I discovered that there was an alcohol-free Doom Bar variant, my interest was piqued. Once upon a time I counted Doom Bar as one of my favourite beers, up until the point where every shit pub started carrying it so that they could say “hey, we don’t just have four different lagers, we have real ale too!” and the name started to conjure up expectations of disappointment. But let’s not let that ruin our excitement.

This claims to be an amber ale but as you can see, it’s dark as the night. The smell carries that thick, sweet, cloying current of wortiness as is so common in attempts to do an alcohol-free beer of this nature. What little head was captured in this photo was gone a few seconds later, but it continued to bubble away. I was expecting the taste of it to be another wortfest, but was pleased that there was very little of that in the flavour. In fact, the flavour was quite peculiar and unbeery. Turning the drink over on my tongue, I came to the conclusion that the flavour of this actually reminded me more of a sort of unsweetened cola than a beer. Absolutely baffling. Will I order it again? At this time, we just can’t say for certain. 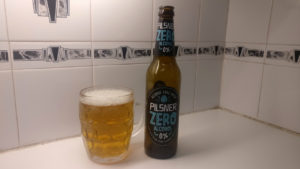 With the exception of the Aldi “Hop Foundry” range (reviewed here), this is the first supermarket own-brand alcohol-free beer I’ve come across. It has the colour of apple juice, and weirdly smells a bit like it too. The head was gone fairly quickly, but the beer still had some bubbles in it, which seems to be becoming a recurring theme in this post. The flavour is sharp and acidic, again not doing anything to discourage those comparisons with apple juice. I could probably tolerate this beer again, but I don’t think I’d actively seek it out. Apple juice is cheaper. 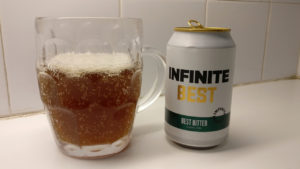 The Infinite Session American Pale Ale was one of the first alcohol-free beers I reviewed, and has been an enduring staple in my stash, that I’ve returned to again and again. One of the things I’ve noticed, since I switched to alcohol-free beer, is that the type of beer I drink has changed a lot. I used to tend towards drinking darker beers, but these are harder to translate to alcohol-free, which means that I now favour IPAs and wheat beers, as there are better pickings in this department. I’m constantly on the prowl for an alcohol-free bitter that can keep up with its alcoholic brethren. Will this beer meet the test?

It’s fairly dark and very cloudy. The smell is passable, though a little on the worty side, no surprise there. The flavour is actually quite pleasant, though if you close your eyes it actually feels more like drinking a watery stout than a bitter. So, in conclusion: solid effort, but not the breakthrough I was hoping for. 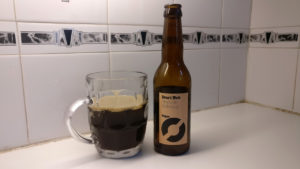 One of the things I really dig about the monthly beer box is how there’s always some weird unpronounceable stuff from Norway or somewhere like that, which must be really hard to stumble upon by accident, but the curator of that beer box goes out of his way to find these little gems and share them with us.

This stout is thick and dark and viscous, with a sweet caramel-like smell, and hints of coffee and chocolate. The flavour is absolutely immense. It’s rich, heavenly, smooth and succulently balanced. This is a superb milkstout, and blasts its way right to the top of the “fool your friends” list. Put this alongside Big Drop Arctic Beach, Lowtide Who Let The Bees Stout and Tiny Rebel Space Cake, and what you’ve got right there is a list of 4 immaculate yet diverse alcohol-free stouts that will keep you warm for the rest of your life.