It must be the magic of the season, but something very mysterious happened with this month’s AFBeerClub box. It arrived a couple of days before we were due to depart on holiday, which struck me as a good arrangement because I’d then be able to drink them and write my reviews while I was away. As always, I opened the box to briefly check out the contents, to ascertain how many were beers that I’ve tried before, and how many were not really beer at all. My previous experience has been that, in a box of 8, I can expect for there to be a couple that I’ve had before, and a couple that are actually a sour fruity drink that bears little or no resemblance to beer.

This is where we get to the magic. Each time I looked in this month’s box, the number of new beers was less and less. Upon my first (very quick) inspection, I established that there were 4 new ones. Next time I checked, it was down to 3. And by the time I came to unpacking the box at our holiday apartment, I came to the conclusion that there were only 2 new beers in this box. How did this happen? I have no idea. But all I do know is that in this box there are only these two new beers. 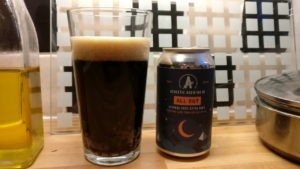 The label doesn’t lie, this is indeed extra dark, and has a lovely little head that sat there patiently waiting for me to take my first sip. The smell is absolutely divine, with coffee and toffee and chocolate. The taste is just as good, lovely and rich and syrupy. I passed it to Karen, expecting her to make The Face (because that’s the mark of a good beer) and indeed she did – three times in a row, all from the one sip! One of these days, I must record a video of her making The Face.

To ØL – Driving Home From Xmas 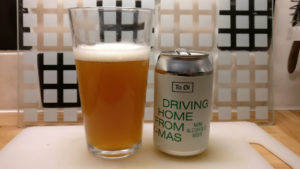 I saved this one for the evening of December 25th, naturally. It’s very cloudy with a smell of bananas. The flavour is funky and fusty, while also sour and tangy. Karen had a sip, of course, and remarked upon an elusive floral flavour that she couldn’t quite place. She quite liked it. I, conversely, did not.

Since there’s so little to review this month, I thought I’d take an opportunity to have a bit of a retrospective on this whole project, since we’re now at the all-import 42nd instalment. Looking back, I see that this project has gone through three distinct “ages”.

The first age was when I was mostly trying alcohol-free beers from pubs and supermarkets. Looking back, this is still the most useful set of posts, as these are the sorts of beers that the average consumer is likely to get the opportunity to try.

The second age was when I had exhausted the range carried by most pubs and supermarkets, and started looking to more specialist retailers.

With the introduction of the AFBeerClub box to my life, this hugely increased the number of beers available for me to try, which meant I was now writing far more reviews. However, it’s also yet another step away from the mainstream, as these tend to be yet more obscure beers that you won’t see in pubs or supermarkets. There have been times where keeping up with my reviewing duties has felt like a chore, and also times where I’ve questioned the value of doing so at all. Early alcohol-free beers gave a bad reputation to AF beer in general, and one of the things I discovered during my early forays was that while there were still some really undrinkable options out there, there were also some real gems. So I started this series to help people know which to avoid, and which were worth a try. I feel like I’ve drifted away from that, and now this project feels like something that I only continue doing because I’ve established the habit.

It feels like time for a change. What form that change might take, I don’t yet know. There are many factors at play. If I decide that the AFBeerClub subscription is no longer giving me good value, and choose to cancel it, then that will obviously have a huge influence. Maybe I’ll even decide that it’s time for me to settle down and stop chasing novelty, like some kind of old man who has one type of beer he drinks, and that’s it. Maybe I’ll keep getting the subscription box, but leave the reviewing to others who are far better at identifying and conveying subtle nuances. Or maybe I’ll just keep doing this thing, because I am a creature of habit. So what I’m basically trying to say is that next year, this series will either:

There you go, some clarity for ya. Hope this helps.