We set up for our first attempt at November. The initial spread of disease cubes was fairly yellow-heavy. 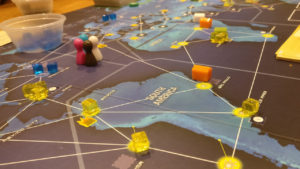 Quite a lot of yellow cubes to start this game 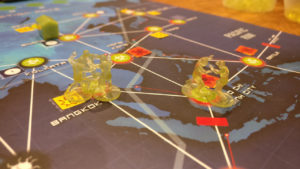 While choosing our characters, we realised that we’ve been cheating when playing the quarantine specialist, by treating their “quarantine anywhere on the board” ability as a free move, and not spending an action. Oops. Our objectives for this game are as follows:

(as usual, only 2 of the 3 optional objectives are required).

We chose to play as the following characters for this game: 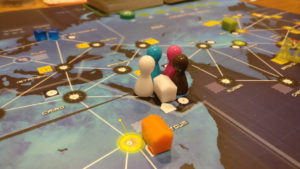 Our four intrepid pawns, ready to save the world once again

The generalist seemed like they’d be useful as they have a character upgrade that helps sabotaging military bases, and the operations expert would be able to build vaccine factories and travel from them to cities deep in the Faded zone, which also sounded useful. This is the first time we’ve played the Immunologist, and gave them a relationship with the virologist. 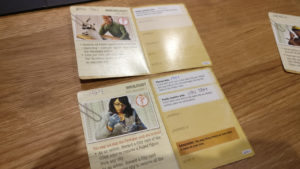 Thanks to winning the last couple of games in a row, we had no funded events for this game. We spent a lot of time considering where to place our 3 free roadblocks (from our October win bonus) and eventually decided not to place them, as we thought they do more harm than good. Eventually the game was underway.

We had a fairly early epidemic in Osaka which wasn’t too worrisome, apart from the fact that the card came back up very soon thereafter, causing an outbreak. Osaka is one of the few Faded cities to have not experienced an outbreak before, so it felt like a shame to lose this streak. 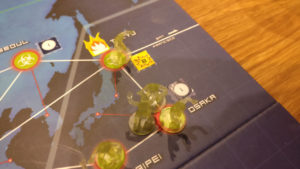 The first city to be vaccinated was Los Angeles. We also built a vaccine factory there, as we figured that getting those vaccine factories out early would allow us to start building stockpiles of vaccine. 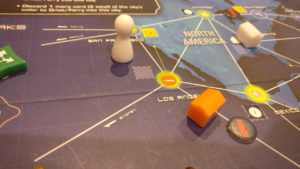 Derek getting the vaccine project underway

Meanwhile, Asia was starting to look a bit nasty, with another outbreak. Fortunately by now I had accumulated 4 yellow city cards in my hand, plus some induced pluripotent stem cells, so was able to cure the yellow disease. 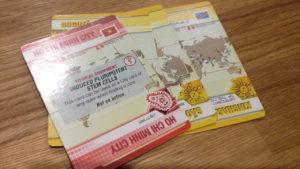 The situation in the Faded region continued to worsen, with Manila and Bangkok both going particularly badly. It wasn’t all terrible – Karen managed to cure the black disease, and we were able to vaccinate Osaka and build a vaccine factory there, and we managed to sabotage the military base in Shanghai. However, we had to use the nuclear option to stop Bangkok getting out of control. In hindsight, it didn’t really help us all that much, so maybe we wasted that card. 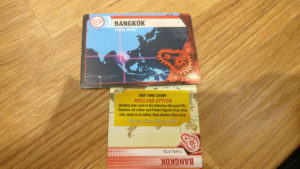 With outbreaks in Milan, Sydney and Buenos Aires, this game utterly kicked our asses. We realised that our choices of characters were not good, and we didn’t really make use of them that much. Also, the Virologist has a scar that means that they can not move more than 2 steps in a turn, which turned out to be much more of a hindrance than we had previously thought. For our game end upgrades, we converted both of our vaccine factories (Los Angeles and Osaka) into starting vaccine factories. Both cities are vaccinated, so the risk of an outbreak occurring in either of these cities and causing the vaccine factory to be destroyed is near-zero. Also, this means that next time we play November, one of our optional objectives is already completed right off the bat, allowing us to focus better on the remaining ones. We stopped here for dinner, and then returned for another try.

We had a bit of luck with the initial allocation of disease cubes here, as one of the “3 cube” cities was a vaccinated one, meaning that no cubes were placed. Overall, the bias here was again towards yellow cities. Interestingly, there were no Faded in the initial placement at all, which took a bit of the pressure off on that front. 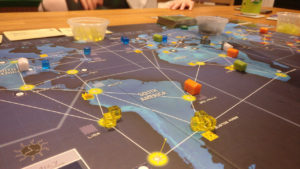 We were much less reluctant to place our 3 bonus roadblocks this time, and decided to put them around the worst cities in Asia, which are already roadblocked off from the south. 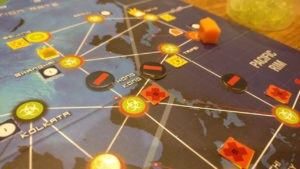 We took the Generalist out (as sabotaging military bases was no longer a priority) and the Virologist (owing to their movement-limiting scar). We brought back the Medic, who we haven’t played for a while, and the Dispatcher, as their ability to move other players is something that we’ve always been able to make a lot of use of in the past. We kept the Operations Expert in, as though we didn’t make much use of their abilities in the last game, they still seemed like a more useful character than the other options.

The first epidemic card was unfortunately right at the top of the player deck. It occurred in Montreal, and with the very small collection of cards being shuffled back in, it meant that Montreal came up again very soon thereafter, resulting in an outbreak that we couldn’t really have done anything about. A similar thing happened 15 minutes later, with an epidemic and subsequent outbreak in Sydney. 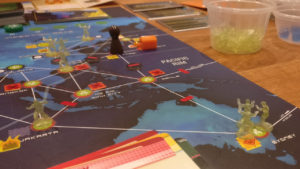 The state of Sydney, eh?

That said, things seemed to be going fairly well in this game. There were some concerns here and there, but mostly things seemed to be going to plan, with all players pulling their weight and doing good work. We managed to cure and eradicate the black disease, and then things started to get away from us. An epidemic in Beijing, followed by an outbreak in Beijing, followed by a double outbreak in Beijing and the adjacent Seoul had us against the ropes. Cures for the blue and yellow diseases were both very close, and we’d also managed to vaccinate 5 cities, so that objective was near completion too. We were then finished off by an epidemic and ensuing outbreak in Washington, followed by an outbreak in New York. 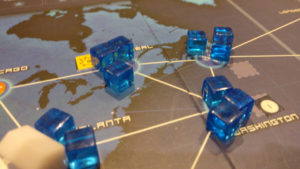 Eventually, the blue did us in

For our game end upgrades, none of the options felt terribly compelling. We decided to give a hand limit character upgrade to Wei, to cancel out their scar. 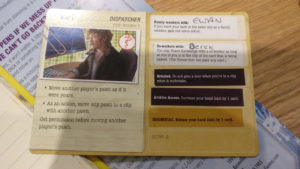 We also chose to convert three roadblocks to permanent roadblocks, as the Immunologist’s abilities meant that we’d be able to vaccinate the worst cities without needing to actually go into them, so we might as well contain them. 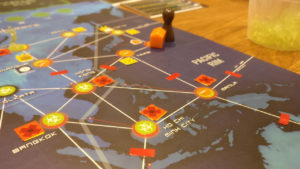 No-one’s ever going into these cities again

We’d never done more than 2 games in a session, but it was 9pm on New Years Eve, and I felt that we had a decent chance at winning, which would be a great way to end 2021, so I pushed for us to play a third.

The mission briefing for December brought a big upset. All previous objectives were gone, including the long-standing mandatory objective to cure 3 diseases. We now just had two mandatory objectives – to vaccinate every Faded city (as I had suspected), and to find and destroy a secret stockpile of COdA in Atlanta. 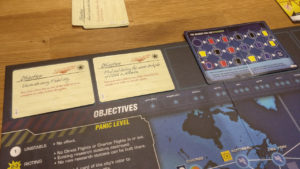 The search mechanism here required a player to be in Atlanta and to “pay” a number of city cards of the appropriate colour in order to advance the search track. The starting distribution of cubes wasn’t too bad – mostly biased towards yellow and blue, without many unfortunate adjacent positionings. 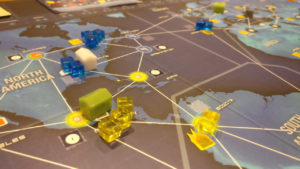 Initial cubes in yellow and blue 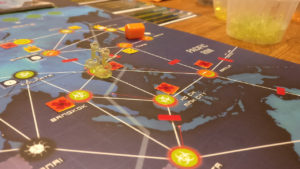 A small cluster of ruffians

At this point we also noticed another couple of rules that we’d overlooked in the previous game. Given how close the previous game was, these might have been the difference between winning and losing. The first is that, when placing a Faded figure as a result of drawing a red player card, you should not do this if it would cause an outbreak. 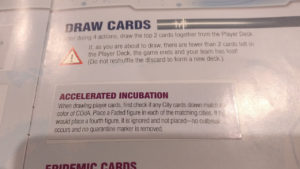 “Accelerated Incubation” rules should never cause an outbreak

The second is that we’d forgotten about Eric’s ability to treat adjacent cities without having to actually go into them. The action points that this would have saved us could have been enough to tip the balance. 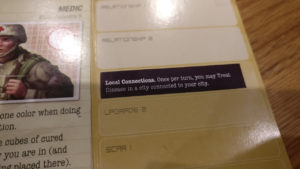 Eric only has one upgrade, but we haven’t played him for a while, so we forgot about it

We played the same characters as in the previous game, as it felt like the objectives weren’t sufficiently different to demand a change. Many of our characters have now very much fallen by the wayside, as their skills don’t really square with what we’re trying to do these days.

The game got off to a decent start, with lots of searching in Atlanta, while other characters made their way across to the Faded regions to do some vaccinating there. We realised that of the two objectives, if we could only complete one then we should prioritise the vaccination efforts, as progress on that is cumulative, whereas the search would reset if we had to replay December.

There was a very early epidemic in Santiago, and as usual Hong Kong was starting to fill up with Faded. The medic’s abilities were very useful, and while progress felt slow at first, we did at least feel like we were staying on top of the diseases.

Madrid, one of our initial three-cubers, had an outbreak before we could get to it. We then experienced an epidemic in Karachi followed by an outbreak a few minutes later, so the situation in that part of the world started to look a little concerning. 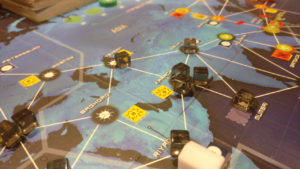 On the plus side, vaccination efforts in Asia were going well, with about half of the Faded cities in that region now vaccinated. 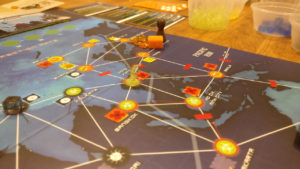 Look at all those vaccinated cities at the top!

An epidemic in Manila was averted, as the city was already vaccinated. As the number of vaccinated cities goes up, we are starting to actually look forward to seeing red cards coming up, as they are potentially less damaging than cards of the other colours. At this point we now had a mere 4 cities left to vaccinate, and only 5 steps on the search tracker.

After vaccinating a couple more cities, we realised that after the averted Manila epidemic, we had forgotten to reshuffle the discard pile onto the top of the deck. We did this at the point at which we realised, but then another epidemic came out immediately afterwards, so things were a bit confused.

We realised that it was inevitable that we’d run out of time. While we had enough city cards between us to complete the search, there weren’t enough cards left in the player deck to get around to being able to use them. In good news, we did manage to vaccinate every last Faded city. We shifted into damage limitation mode, but unfortunately the game fell apart a bit at the end – on the last few turns we had double outbreaks in Cairo and Istanbul, and Montreal and New York. Derek and Eric both used the “self-sacrifice” actions to skip the infect step by taking a scar, because we judged that there wouldn’t be much need to build roadblocks or vaccinate any further. 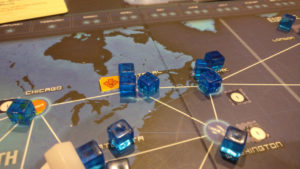 Chaos in North America to end the game. Montreal went downhill badly during this game 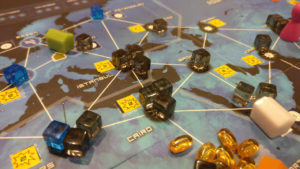 Lots of outbreaks in the black disease area this game too 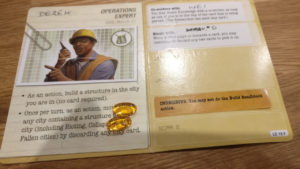 Derek can no longer build roadblocks. Not that he ever did, anyway 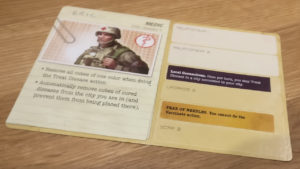 Eric can no longer vaccinate. Not that he ever did, anyway

At this point, we decided to call it a night. With every single Faded city now vaccinated, the second attempt at December will hopefully go much better, as we will be able to properly focus on the search for the stockpile, which is effectively now our singular objective.