This year I’ve read even less than last year. I blame Stardew Valley and the continued lack of work travel. Of the paltry 37 books I did manage to read, for the first time five of them are actually audiobooks, and they have crept into the list in two ways: Firstly, what travelling we have done, has been as a family for a couple of short breaks, and we have started listening to audiobooks together on journeys. We all really liked The Curious Incident of the Dog in the Night-Time, which Pete and I had both read before, and we all equally disliked Dave Grohl’s The Storyteller, which is largely self-indulgent twaddle. Secondly, sometimes I listen to music while I’m running, and sometimes I listen to podcasts; now I also listen to audiobooks.

So anyway, which have been the best books? There are in fact eleven in this top ten, but these are featured in no particular order because deciding on an order is an intellectual challenge too far.

A Song of Achilles, and Circe, both by Madeleine Miller
I ended 2020 with The Children of Jocasta, by Natalie Haynes, and immediately followed it with these two, as I do love a well-researched retelling of the classics, with a strong feminist lean, and Madeleine Miller does this quite as well as dear Natalie. Both of these books have stayed with me, details re-occurring throughout the year, and I think somewhere I have recently come across a retelling of Thetis’ tale, which I should probably look into. For your amusement, I followed these two with The Argonauts by Maggie Nelson, which was not in fact a retelling of a classic tale at all, but an early stage of my education about trans issues.

Journey Through Britain, by John Hillaby
You’ll know that in the past I’ve read quite a number of hiking memoirs, and often despaired that the Venn diagram of long distance walkers and good writers does not have a very large shared set. Journey Through Britain is considered something of a grandfather of hiking memoirs, written in the 1960s before technical fabrics and support-insoled hiking boots were a thing. Hillaby has an endearingly arrogant old white blokish sort of style, and walks Lands End to John O’Groats in plimsolls. It’s impressive.

Waterlog, by Roger Deakin
Similarly, this is the grandfather of swimming memoirs, written in the late 1980s. Deakin claims he is swimming the length of Britain, although while he does dip into quite a number of different places, there is no clear linear plan. He just swims where he feels like it, and why not. We newbie wild swimmers of the 2020s may be shocked by his solo ventures and reckless dives – just wait to the bit where he swims alone down a pothole in the Yorkshire Dales, it’s astonishingly dangerous stuff. However he does evoke the most glorious freshwater experiences, and inspire the reader to want to holiday near the sea for a long period of time and swim two or three times a day. Delightful.

In The Darkroom, by Susan Faludi
This too is a memoir. Faludi’s hungarian father transitions in her 70s to live as a woman, and Faludi writes about how this reframes her perspective on her relationship with her father, and their difficult history. Really fascinating both as a personal journey, an exploration of one particular transgender experience, and also as a bonus, the political history of Hungary. This book was a surprising, transformative read.

Mothership, by Frances Segal
Another memoir! Segal’s twin daughters are born prematurely, and spend the first several months of their lives in NICU. Segal writes about forming a relationship with them through their plastic incubators, her first opportunity to hold them, the camaraderie of the expressing room, the everyday terror of losing them as they struggle to survive. Gripping and heartbreaking, this book is an insight into the importance of relationships in new parenthood, from an angle we might not often consider. Could not put this down, in case something happened to one of the babies while I was away.

Bee Season, by Myla Goldberg
I don’t seem to have read much fiction this year, not sure why my to-read shelf is so full of Serious Educational Tomes. Bee Season was a nice break from all that, which I knocked off in a day, possibly when I was recovering from my covid booster. Delightfully geeky and unexpectedly twisty, just what we want from our escapes into fiction these days.

White Fragility, by Robin diAngelo
A friend of mine introduced me to Libby, the free library app, which has audiobooks available. It doesn’t have many, but by some lucky coincidence, it did have the very first book I searched for (setting up some high and to-be-disappointed expectations), which was this. White Fragility has changed my understanding of race and racism, in ways I have found incredibly helpful. Alongside probably many other charities, we have been doing lots of anti-bias/cultural safety/not being racist training in work this year, so I know I have a huge amount of work to do, and listening to this while running was great because I so rarely have the mental space to process this sort of thinking, and running does give me that. diAngelo absolutely pulls no punches in this book, and it was again a transformative experience. 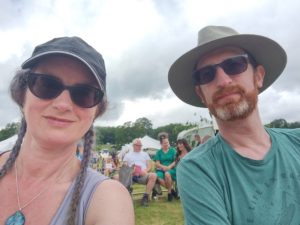 The Art of Rest, by Claudia Hammond
I always make it a point to buy a book at the Also Festival, and while 2020’s festival went digital (giving us a lovely weekend of talks from the comfort of our sofa), I still did buy something, and it was this. It then sat on my shelf for the rest of 2020 and most of 2021, I think because I became less strict about taking things off the to-read shelf in the right order, and somehow during all that enforced rest, I felt no need to read about the subject. Often I will skim these interesting sciencey books that I buy slightly out of obligation, but I read every word of this and was pleased to discover that reading was in fact the official best way to have a rest. I already knew that, but if Claudia Hammond says it, then it must be true.

(M)Otherhood, by Pragya Agarwal
In fact, the Also Festival did go ahead in 2021, back in the field where it was supposed to be. We went, and had a nice time. Pragya Agarwal was one of the speakers I was particularly looking forward to, and wouldn’t you know it, her talk about her book Sway (which I also read this year) clashed with Jamie Bartlett, and that was a very difficult decision. I did get to listen to her smaller-scale (no slides) talk on (M)Otherhood, and then bought it and she signed it for me, and we follow each other on twitter and sometimes she replies to me, which makes me squee a bit. Anyway, the book. Another memoir! This one winds together the author’s personal story of motherhood, abortion, infertility and surrogacy, with a wider exploration of those issues within global society. This is not just a book for women, or for mothers, but a well-researched and evidenced book on how society views and values (or doesn’t value) women and motherhood, and why this matters for every human on the planet. 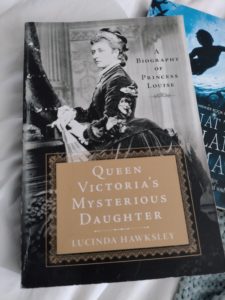 Queen Victoria’s Mysterious Daughter, by Lucinda Hawksley
I’m just going to tell you that this is the best work of non-fiction writing that I have ever read. I have absolutely no interest in Princess Louise, or Victorian society, or royalty: none. This book was on my shelf after meeting the author, again at the Also Festival – in fact she sat down and had lunch with Susan and me, and we had both read another of her books, March Women March, and she told us about this one which I think had just come out, so yes I went ahead and bought it (though failed to get it signed). Lucinda is the great-great-great grandaughter of Charles Dickens and the sister of a former colleague of mine, and a generally lovely person who once agreed to do a podcast with me. Princess Louise, who I had never heard of, was a strong woman living in difficult times, and while having no interest whatsoever, as I may have mentioned, I was utterly glued to this book. With writing like this, absolutely anyone would become interesting – it’s testament to the fact that the author failed to find out any details of the juciest scandal of Princess Louise’s life, and yet made the mystery around that, its context and consequences, into such a gripping biography. Bloody well done, I say.

I finished Princess Louise last night, and quite fancy a bit of fiction now, as a small palate-cleanser. My unconscious decision to lean into memoirs is still evident from my to-read shelf, so expect more of the same next January. It seems like this year, the books I’ve liked the most have generally been ones that were good for me, and I’m self-indulgently intrigued at why this has become such a focus. Maybe I’ll blog about that, when I figure it out.