We felt fairly confident going into this game. In the previous game we’d managed to vaccinate a whole bunch of cities and collect up all the cards needed to find the COdA stockpile, and the only thing preventing us from winning was running out of cards in the player deck. Therefore, given that we no longer had to worry about vaccination, surely that would make this game a doddle by comparison. Right?

We got a fairly favourable initial deal of disease cubes. Lots of them corresponded to vaccinated cities, which meant that they were effectively nullified, and the result was a small blue cluster and a sprinkling of cubes elsewhere. 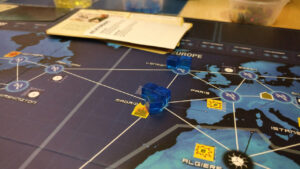 We chose to play as the following characters:

With this team, Eric could focus on managing any disease cubes that appear on the board, while Wei could move people around with speed, warping people back to Atlanta when they need to search, and warping players to each other when they need to trade cards.

An early epidemic and immediate subsequent outbreak in New York put a bit of a dampener on our spirits. However, we played cautiously and methodically, thinking about how to consolidate city cards to optimise searching, while the disease cubes on the board were well under control. 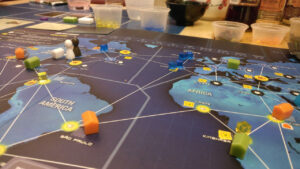 Search progress was coming along nicely, but as the third epidemic popped up, we started to get worried about the state of the trail. There was a feeling that at about this time, we were merely killing time waiting for the red city cards to pop up so that we could advance the search. 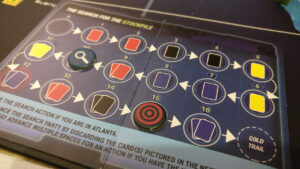 This trail is not as warm as it once was

Sadly the epidemics got the better of us, and the trail went cold before we could reach the target. We felt that we had some poor luck here, with the epidemics seeming to come up generally earlier than average, and a real shortage of red city cards. Since the state of the board hadn’t changed much during this game, and we had only been playing for about an hour (of which the first 20 minutes was setup and strategising) we decided to pretend that this hadn’t happened, and replay the game.

We felt fairly confident going into this game. In the previous game we’d managed to vaccinate a whole bunch of cities and collect up all the cards needed to find the COdA stockpile, and the only thing preventing us from winning was running out of cards in the player deck. Therefore, given that we no longer had to worry about vaccination, surely that would make this game a doddle by comparison. Right?

We had a fairly favourable initial cube allocation – no troublesome clusters, and plenty of vaccinated cities in those initial 9 meaning no cubes had to be placed. 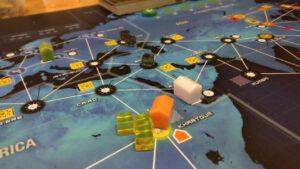 Initial cubes for our (cough) second attempt at December

We chose to play as the following characters:

Eric the Medic would clearly be useless in a scenario such as this, hence Karen’s choice of Colonel K*D, not that it really needs justifying, because it’s just so patently obvious.

We did slightly worry about the supply of red city cards. We cast our minds back to those occasions when we’d had a “permanently destroy any card of your choice” sorts of opportunities, and if we’d possibly nuked all the red city cards out of existence.

We took an early decision to make use of the relationship between Derek and K*D to trade 2 black city cards for a single red city card out of the discard pile. Red cards are like gold dust, and we think we have black cards to spare.

Time ticked by, and the epidemics continued to trickle in. We realised that getting pairs of city cards into peoples’ hands was only part of the problem – we also needed to consider the order in which we take our turns. I mused that it would be great if the developers of the game had provided an event card that enabled us to take turns out of sequence, or reverse the direction of play, or something like that. 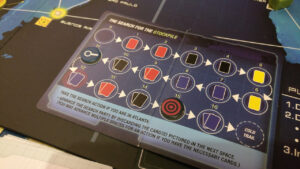 Three epidemics down, but we’re closing in 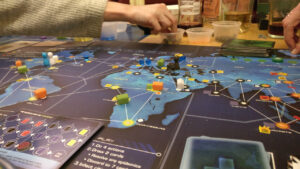 The state of the world, during the closing stages of the game

With one life left, time was ticking away, but we came up with a masterful plan to get the three required pairs of city cards into Susan’s hand, hence circumvening the complexities associated with the order that we have to take turns in. All that Gammidgy needed to do on his turn was to not draw an epidemic, and we’d be home free. 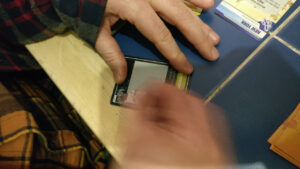 With the COdA stockpile found and destroyed, we scratched off the silver panel and totted up our final scores. We got 565/1000 – not great, not terrible.

To finish the evening, we played a nice little game of Azul and called it a night. We’re definitely interested in playing season 2 of Pandemic Legacy, though not straight away. Before we started playing season 1 we used to play a variety of games on our board game nights, so it’ll be nice to enjoy that for a little while before we commit to a legacy game again. I did feel that season 1 ended with more of a whimper than a bang, as our last game ultimately revolved around a fairly banal searching exercise that felt like it was affected more by luck than skill.

Thank you very much for staying with the series, and when we play the next season, I intend to keep a log again.