It was almost exactly a year to the day ago that I wrote a blog post about cats. As mentioned in that post, Henry left us soon afterwards (his toilet habits were too extreme for us to handle) and since then we’ve been in a sort of catless abyss. We had plans to convert the conservatory into a kitchen, and so we’d agreed that it made sense to wait until after that work was complete before getting a new cat. Sadly, the new kitchen never materialised, and it took us a while to accept that it was never going to. So, with the kitchen plan shelved, the cat plan is back on the table, and after browsing the Battersea catalogue, we selected Boo! 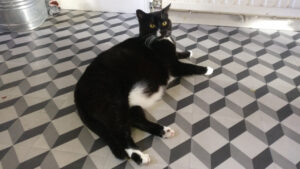 Boo has been with us for three weeks now, and here’s what we’ve learned about her.

In the first few days, some things became apparent. Firstly, she’s a bit of a chonker. She’s overweight, at more than 6kg, and needs to slim down. We have also learned that her reaction to a new environment is to crawl under the sofa (which is quite the impressive feat, given her bulk) and hide. She’s generally not terribly touchy-feely, but she has moments during the day where she enjoys a vigorous stroke on her cheeks, head and shoulder area. For the first few days she hung around the table a lot at mealtimes, watching us, standing up on her hind legs, and trying to touch a bread roll. We suspect that her previous owners (an elderly couple, now deceased) may have fed her from the table, which would explain both this behaviour and her portliness. Thankfully, after a few days of us refusing to indulge her, she has given up on this silliness.

Over the weeks she has settled in. She often comes into my office during the afternoon to be picked up and put on my lap and stroked for a bit. My colleagues find this adorable as my microphone picks up her purring clearly. She’s doing well on the diet front, and her weight does seem to be slowly dropping. She doesn’t hide under the sofa any more, preferring instead to spend much of the day under our bed. However, she is much more comfortable with our presence, and generally no longer startles and runs away when someone walks in her direction at any significant speed. She’s even joined me for bass practice once, so the sound of that clearly does not bother her. Initially, she spent a lot of time sat in a lovely little cardboard box that we set up for her, but has since eschewed that, and it has sat ignored ever since. We should probably get round to tidying that away at some point.

She also likes to sit in the kitchen – the famous “Henry spot” where the hot water pipes run under the floor – where she sometimes strikes the most elegant pose imaginable. 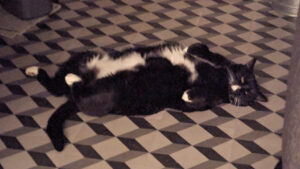 On the subject of the name, we all felt that Boo was a fairly crap effort, and considered whether we’d refer to her by something else. However, we all seem to be fairly lazy, so we’ve been sticking with Boo.

She seems to be pretty good with the catflap, unlike Henry was. It surprises us that she even fits through the thing, but I guess she compresses down quite nicely when required. However she totally ignores the scratching utensils provided, and prefers the carpet instead, which we’re pretty displeased about.