If you’re anything like me, you have a large box of artefacts that you keep in the garage, or maybe the attic, which contains all sorts of significant items from your life so far. I also have a smaller box that I keep on the shelf above my desk which acts as a kind of holding area – an easy-to-reach place where things will sit temporarily. That box fills up every few years, and that triggers the extraction of the large box from the garage so that the new items can be transferred in. 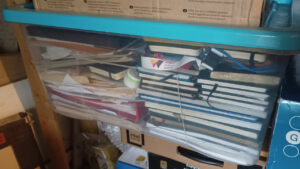 To describe the large box in filesystem terms, it’s optimised for writes. It contains all sorts of things – letters, notebooks, ticket stubs, concert programmes, a small piece of the Berlin Wall – and any grouping is mostly coincidental. There’s some vague semblance of chronology, by dint of temporally-related items being put in at about the same time, but the need to repeatedly reorganise the box to fit everything in has resulted in this being greatly undermined. There’s also a smaller box in it that generally contains concert tickets, which prevents all of those from sinking to the bottom and getting lost.

Opening the box is a dangerous affair, because I know how easy it would be to disappear into a cloud of nostalgia and not emerge for about twelve hours. In order to try and keep things under control, I attempt to skim through at speed, not getting too bogged down in the details, fighting my urge to read every letter in its entirety. There’s another danger too, in that while some items, like concert tickets and notebooks, are generally pretty much self-documenting, others may be a little more obscure, and the process of flicking through the contents of the treasure chest may result in those items becoming separated from other items that give them the necessary context.

I find myself wondering if there would be value in organising the box in some way. Giving it structure might make me more likely to dip into it occasionally for a brief, focused exploration, instead of having to always go all-or-nothing. Chronological certainly has a lot going for it – if I were to break it out into four separate boxes representing the four ages of Pete, then this could help. Alternatively I could split by type – there’s already a sub-box for concert tickets, which could be tightened up and then joined by a sub-box for letters (and maybe pull diaries, notebooks and journals out entirely).

What do you think? What does your trove look like? How big is it? Is there structure? How often do you go into it, and when you do, how long do you get lost in it for?

1 thought on “The Treasure Chest”