The first thing I was surprised by was the fairly significant gameplay differences to the previous season. Whereas Season One takes the core gameplay elements from the non-legacy game (you have four independent diseases and need to move around a world map, finding cures for them), Season Two throws that out the window.

The setting for this game is that it’s 70 years after a cataclysmic world-changing pandemic, and most of humankind are managing to escape it by living in offshore havens. So huge change number one is that instead of starting with the entire world to play with, you just have access to the Atlantic Ocean and Mediterranean Sea, with 3 offshore havens and 9 coastal cities. More areas will be unlocked as we progress through the game.

Thankfully, the game developers include instructions for a non-destructive “prologue” mode to allow you to familiarise yourself with the new rules, without starting the legacy playthrough proper.

Step one was to name our three havens. We eventually settled on “Gloomfort”, “Helm’s Deep”, and “The Winchester” 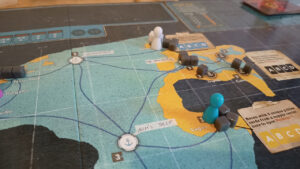 Step two was to create our characters. Allow me to introduce them.

Lucius Keswick starts at The Winchester and is an Administrator, which means that once per turn he can move any pawn to the same location as any other pawn. This is a slightly nerfed version of the Dispatcher from the previous game, as the dispatcher could also move other pawns to adjacent locations, and could do this multiple times in a turn. 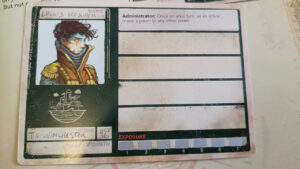 Paphoestra starts at Gloomfort (erroneously filled in on the character sheet as Gloomhaven) and is a Radio Operator which allows her to transfer supply cubes to and from characters in any location. This is also a free action. 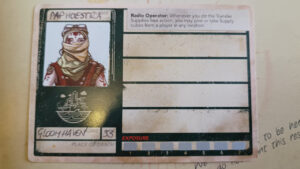 Bez starts at The Winchester and is a Labourer, which means they can build supply centres with just 4 cards instead of 5. However, there is a cost of 2 supply cubes to do this. This is broadly similar to the scientist role in the previous game. 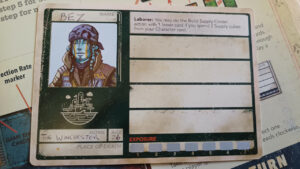 Maggot starts at Helm’s Deep and is a Farmer (of course), and can make supplies and deliver them in a single action, whereas it would normally take two actions. 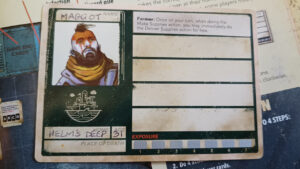 Finally, Ophelia lives in Helm’s Deep and is an Instructor, which allows her to give any card to another player in her location, not dissimilar to the researcher in the previous game (but again a bit less powerful). 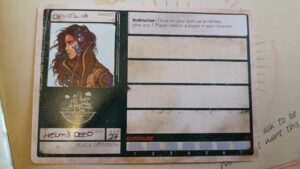 We played two prologue games, of which we won one and lost one. We then had our dinner before settling down to play our first attempt at January. We were given two mandatory objectives:

To do the second, we’d need to build a supply centre in Washington, and then also spend another three blue city cards there. This would then permanently expand the scope of our game board to include that region of the world.

We were also given the first of our turning point cards, which hang around until the specified criteria are triggered. In this case, once any city drops to zero population, we apply the given instruction at the end of that game. 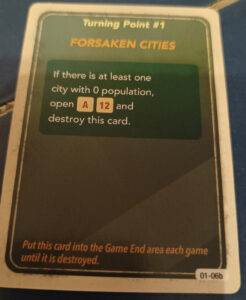 We picked the following characters:

Karen managed to turn up an epidemic card on her first turn, which was terrible luck, and indeed she was also responsible for the majority of epidemics thereafter, which is very suspicious. This first epidemic was in Istanbul. In this game, when an epidemic hits a city, you remove all of the supply cubes from it. Having no supply cubes on a city is dangerous, because then whenever it comes up when drawing infection cards, a plague cube gets put on. As mentioned before, each of these plague cubes takes us 1/8 of the way to losing the game.

After one go round the board, things were moving slowly. Susan had 3 yellows in her hand, which meant she was only one away from being able to build our first supply centre. Already we could see that achieving both mandatory objectives in the game would be a stretch, as we struggled to achieve just one of them when playing the prologue games. However, if we had to prioritise one, then it made sense to prioritise the objective to recon North America, as this would not need to be done a second time.

After our second set of turns, things were still fairly stable. Gammidgy and I were starting to accumulate a few blue cards in our hands. 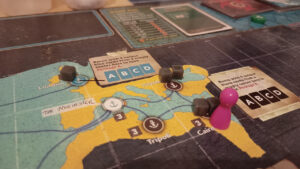 During our third turn, a second epidemic came up in Istanbul, wiping out all the supply cubes that we’d only just refilled the city with. Susan managed to accumulate the four yellow city cards (plus two supply cubes) to build our first supply centre in Lagos. By the end of this turn, it felt like the number of supply cubes out there was dwindling fast. From the start of the game, when there were 25 out, it had now dropped to 13. A third epidemic in Istanbul meant that there was now a plague cube there. 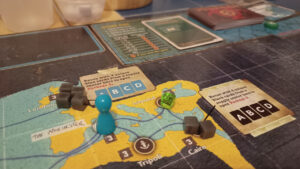 In good news, however, I had 3 blue cards and 2 blacks in my hand, and Gammidgy had 3 blacks and 2 blues, which meant that as long as we could figure out how to get the cards into the hands of the people who needed them, we were in with a shot. Susan ended a turn in Istanbul – you definitely don’t want to start your turn in a city with a plague cube, as you will pick up a scar and potentially even die immediately, but the administrator’s power is great for extracting characters from dangerous locations.

At this point we counted up the cards in the player deck and realised we only had enough time left for two more turns around the table. We concluded that there was absolutely no way we could achieve both mandatory objectives in this game, so having resigned ourselves to a best-case scenario of just hitting one, we all started to converge on Washington. We had an idea for how we could get enough blue cards into my hand that I would be able to build a supply centre in Washington and perform the recon on my final turn. The next epidemic was in London, and the floodgates were well and truly open. Sao Paulo was in a terrible state. Our plan would only work if we got lucky with the infections – too many disease cubes would spell the end of us. 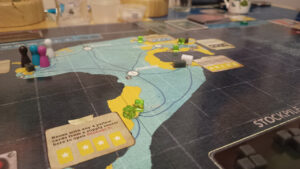 We managed to pull off the recon mission, but only by the skin of our teeth. Opening the package as instructed gave us the sticker for North America, plus the creation of two new actions. 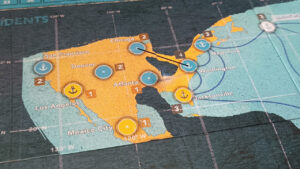 The new area that we’ll be exploring in the next game (there are no tokens on the board, because I took this photo after we’d already packed away)

The first action is the creation of supply lines. We have to build our own road network! These roads must be drawn on the map in pen, and must be straight lines that don’t cross water or other supply lines. The more cities we link into the road network, the more points we get for game-end upgrades.

The second action concerns “searching”. Some city cards have scratch-off panels on them, and spending an action would allow us to scratch off the panel and see what is underneath. Some cards would yield a one-time instruction, others would give a companion who grants a permanent ability. I guess we’ll learn more about that when we get to try it.

By this time we were sailing very close to the edge so it won’t surprise you to learn that by the end of my turn, we had lost the game. But at least we got the recon complete, so we’ve achieved something positive.

In the game end reckoning, 5 cities have lost population (by dint of having disease cubes in them) and 2 have gained population (by dint of having a supply centre). Lots of new rationed and unrationed event cards (the equivalent of funded and unfunded events in the previous game) have been added to our deck. With 3 points available for game-end upgrades, we decided to give Ophelia the Helmsman perk which would slightly reduce the action point cost for movement. 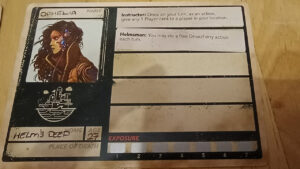 We didn’t have enough energy left for a second attempt at January, so called it a night. Our conclusions from this first game is that it feels much more difficult than the first season, though we are enjoying the change-up in the game mechanics. This might be a game that we lose at very often.