While it may seem to be a bit strange to be writing this summary while there is still nearly 1/12 of the year left, I have now more or less stopped using Twitter, so it’s safe to assume that there’s not going to be any eleventh-hour additions.

This is pancakes with gammon, sausages, bacon, stuffing and maple syrup. It’s another one of my culinary victories. 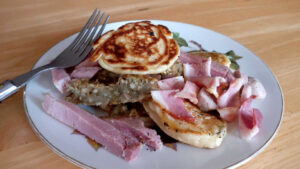 I feel like I got this year off to a good start.

I recently stumbled upon a backup of a blog that I wrote back in 2004, under a pseudonym. I remembered about the blog, but what I had forgotten is that apparently there was an additional contributor. I can’t remember who they were. This is a very exciting mystery.27 January 2022

I still haven’t figured this out. I’ve got a theory, but it’s only a theory.

This looks like I’ve freeze framed her in the middle of a ridiculous rotation, but no, she really just lies like this. 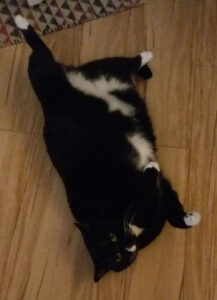 The fluffy tummy is so inviting, but you know what will happen if you reach for it.

Many people think that the idea of combining potatoes with flour and rolling it into little balls won’t work, but I think they shouldn’t gnocchi it until they’ve tried it.8 February 2022

If you groaned, then that’s as good as a laugh in my book.

I’ve booked my 5 year old phone in for a battery replacement on Tuesday. As you can probably tell, I quite like this phone.12 March 2022

This turned out to be a terrible idea. The “new” battery was as bad as, if not worse than, the old one. I ended up having to buy a new phone, which was a bit of a shame.

I remember asking for a soda stream once upon a time. My parents had the sense to veto that one.

I seem to have form on this one.

In contrast with previous years, I was very quiet on Twitter during Eurovision this year. I think that’s probably because I was chatting with some friends on a Telegram group instead.

The original Pixar Cars movie was fantastic, and I lost track of the number of times I watched and rewatched it with the wee Bernard. The sequel was dire, and so I was expecting the sequel sequel to be direrer. But Bernard recommended it to me, and we watched it together. It was an adorable bonding moment, and the film was superb to boot!

Well compared to the last two Tory prime minister resignation speeches, that one was a bit underwhelming7 July 2022

It says a lot that I couldn’t initially remember exactly whose speech this was, as we’ve had so many Tory prime ministers this year.

Clearing out the garage is always an intensely rewarding experience. I’m never unimpressed by how much space we’re able to reclaim4 September 2022

Based on this post, it seems that we do it about every four years. Hypothetically, if we were to do it more often, would it be less rewarding, because there’s less improvement to be had?

Before this last week, if you asked me whether I was pro or anti monarchy, I’d have said “Moderately anti”. I have to remind myself that social media will always try and push us towards the extremes, and it’s okay to still be “moderately anti”.14 September 2022

Queen Elizabeth 2 died this year. For the last few decades there’s been an undercurrent of murmuring about how big a deal it will be when it happens. Leaving aside the very peculiar behaviour exhibited by those who decided to go into London and queue for hours just to walk past a wooden box, I think we all have to agree that it’s not really affected our lives in the slightest. Some people tried to take this opportunity to start a debate about whether we still need a monarchy, but were shouted down, being told that it was disrespectful to do it at this particular moment. I wonder when the convenient time would be.

Really pisses me off on TV drama shows when a detective walks away from their computer and leaves it unlocked.15 September 2022

An interesting side effect of doing this twitter review project is learning how often I go back to the same well. This particular thought was also tweeted on 9 May 2021 – less than 18 months before. On that occasion, it got 2 likes. This time, it got 27.

As I’ve mentioned before, I’m often less than 100% honest on social media. See if you can guess which part of this particular post was fabricated.

Over recent days I’ve been talking to my cat using a “baby” voice, as an article I read suggested that they respond better to this than being talked to like a human. Much to my chagrin, indeed my relationship with her seems to have improved. I’ve lost all respect for her.28 October 2022

Before this here social media platform collapses entirely, I’m hoping that Google will relaunch Reader and we can all go back to blogging like proper civilised human beings.29 October 2022

The end is nigh.

I went to a leadership skills training session in 2016. When asked to give an example of someone that I respect as a leader, I said @elonmusk. I still cringe when I remember that.31 October 2022

Aaaand the end is nigh again.

You can sense that I’m basically already checked out at this point.

It does feel a little bit like the motif for late 2022 is “rich dickheads get what’s coming to them.” I’m totally here for this.10 November 2022

So, have I left Twitter entirely? No, not completely. But it’s definitely not my first port of call, and I’m much less active on there than I used to be. I might occasionally retweet something interesting, and I may write something on there if I specifically want to tag someone who isn’t in my Mastodon friends list, but I think the key word here is “investment”. Whereas previously I felt invested in Twitter as a community and as an extension of my social life, it’s now just a thing that I’m gradually phasing out, like using up the last of a tub of butter.