This week’s episode was all about desserts, and while some may assert that a trifle is not baking, since nobody, but NOBODY ever makes the sponge for the bottom from scratch, there were some charming petits fours and lots of fun with floating meringues. 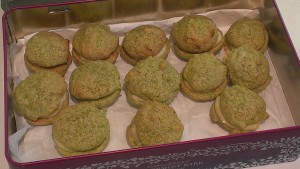 There was plenty of baking at Casa Uborka this week: a plaited milk loaf, two pizzas, tomato tart, and I did in fact rustle up some petits fours, which took approximately five times as long as the recipe said they should. The Pistachio & Honey Kisses tasted super-sweet and in texture were a little soggy, but they got eaten fast enough. They were anything but uniform in appearance. 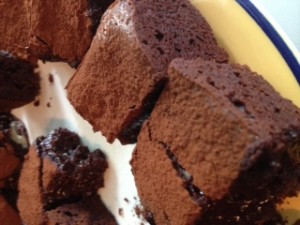 Lisa is shoehorning these white chocolate and coffee truffle brownies into the petits fours category although they are quite grands. Her remarks:

Recipe from the excellent Popina book of baking, doesn’t seem to be online properly but when this one http://cocoashutter.com/2012/05/06/what-makes-you-happy/ says it has been adapted, all the author has done is whack in some walnuts. So make that, sans walnuts, and you have what I have made. If they were less sticky they would be better cut smaller as they are extremely rich and quite sickly – and I speak as one who loves a chocolate Brownie. I cut it into 15 rather than the advised 9, and still would have preferred smaller pieces.
Underdone, too, to my taste: I like a brownie that can be picked up rather than one that needs a spoon. I have put them into the fridge to see if that helps. Now I have tested the recipe I know I can cook them longer next time, but brownies are tricky and are worse over- than underdone. 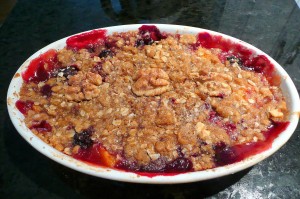 Asta made what she calls a crisp, and we might call a crumble, using peaches and blackberries. This is squeezing itself into the tarte tatin category.

We have an absolutely beautiful looking trifle from K, and here’s what he said about it.

I made individual trifles, rather than one big one – yes, I am that piss elegant.

I took about 200 g of fresh raspberries and mashed them up with a good double measure of Cointreau, a teaspoon of caster sugar and a few chopped mint leaves.

Broke up the sponges into the bottom of a glass dish, added the macerated raspberries and allowed the juices to sink in. I found it necessary to add a bit more Cointreau and some orange juice until all the sponge was wet and red. They sat at room temperature for about two hours.

I but a spoonful of Tiptree raspberry jam into the middle of the fruit as a little surprise.

I then made a classic creme Anglais using Delia’s recipe. I always heat the custard in a bowl over steam to stop it splitting. As soon as it was at the spoon coating stage I transferred the bowl to a sink full of cold water and stirred it until cool.

Then added the custard on top of the fruit and left the whole lot at room temperature because I wanted the custard to drip down the sides of the fruit (see photo, and while you are at it, take note of all those lovely vanilla seeds).

Next I chilled the damned things for several hours until ready to serve (to thicken the custard before adding the cream).

When everybody was pissed, myself included, I whipped double cream – not too stiff. Added on top of the custard then piled berries on top and finished with a dusting of icing sugar.

I was delighted with the appearance, flavours and textures.

Mike would have preferred it in a straight sided dish (get him!) because he thought it would be better to get a balance of fruit and custard. I have to agree with him (FFS). Also, they were bloody big portions. Next time I will be less prissy and make a single trifle in one dish.

All I need to do now is find a suitable, straight side trifle dish. 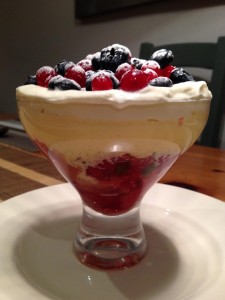 This week’s Star Baker is The Other Mike, who is enjoying acting the domestic goddess while between jobs. In an unconscious nod to the empty-headed marketing executives at google who this week chose to team up with the world’s most evil corporation, he made a Key Lime Pie. I took a video of its unveiling, but uborka won’t let me upload it, but we do have a photograph… 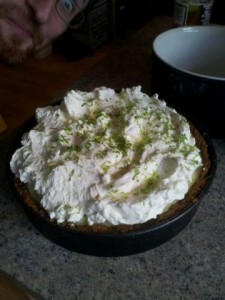