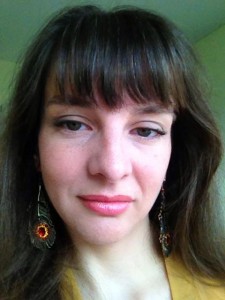 Yes and no – 2005 was the year I moved to my current house with my other half, the ever-laidback @winnits, and our resident winged menaces. I am, though, still in Nottingham. What can I say? It’s had my heart since I was a teenager, and while I loved Sheffield I had the usual pressing financial reasons for not staying there post-University and found my First Proper Job in Nottinghamshire (Summarising the legal output of the European Union for a database, as it happens. Obscure knowledge, I haz it.), so here I stayed.

Probably not! I tend to think of my various blogs through the years as all having been fairly obscure, so I’d be quite surprised (but chuffed!) to be recognised. But they’ve all involved either pictures or vlogs and I am spectacularly uninventive with my appearance and have a convenient identifying birthmark so if you have happened to have stumbled across my online self I’m highly unlikely to have changed since then other than to get a bit older. Say hi!

This is practically shop talk for me. But, since I don’t have any Tarot cards handy at the moment, hard to answer without risking sounding like one of the more amusing-to-look-back-on sections of Tomorrow’s World. Facebook, despite its irritations, has such population saturation that at this point it’s hard to imagine what can follow it – witness poor old Google+, which is actually a great tool to use but suffers from that awkward problem of All My Friends Are Somewhere Else. We’re already seeing businesses exploit social media (with varying degrees of success…), and as recommendation becomes more relevant for SEO expect that to continue.

Yep – in fact, I’ve had a couple since the Browniehut days. These days, I review books and ramble about literature, reading in general, and any other vaguely cultural things I get up to, over at www.feathersandtea.co.uk. But you’ll find me on twitter (@koshkajay) and, since I’m a knitter, on Ravelry (where I’m koshka) periodically, should you wish to admire my jumpers, socks and shawls.

Hmm. Well, I start a new job at the end of this month and my birthday’s in February, so by then I’d like to be feeling fairly settled and reasonably to grips with a completely new technical product range. I have a lot of swotting up to do, so it’s a good job I enjoy Learning All The Things!

Which novel would you say is a ‘must read’, even for someone who doesn’t often find the time to read much fiction?

One novel? Um. That’s like asking me to pick a preferred parent! I think this is one of those questions where you have to consider the interests of the reader – it’s no good me saying everyone should read the Canterbury Tales when plenty of people are more into sci-fi than history, and not everyone’s studied Middle English anyway. So. This is my Goodreads profile, where you can see my favourites and everything else I’ve remembered to put on there.

1984 and V for Vendetta would both be good if you fancy a little dystopianism, Good Omens if your humour is a little bit Pratchett/Gaiman and fantasy is your thing. Cloud 9 is a really strong modern classic, as is A.S. Byatt’s Possession. LOTR is a fantasy classic but you’ll need to be patient with descriptive passages (ditto if you ever fancy tackling any Dickens) and if you don’t get much reading time it will take you an age to get through. Orlando is a snappy little Virginia Woolf that gets oddly little attention but which I love for its approach to history and gender. And then you get into Traditional Literary Classics – I like a bit of Austen, prefer Charlotte Bronte to Emily (and Vilette to Jane Eyre), and find DH Lawrence and I don’t really get along. Or if you like fantasy/sci-fi, pretty much anything published by Angry Robot Books or written by H.G. Wells.

I’m sorry. This happens every time I try to come up with one anything!

Will there be more video blog posts, and how do you find they differ to standard written posts?

Yes, there will indeed. The first one was something of by-product of something I was doing elsewhere on th’internet, and then the second seemed like a good way to express what I was thinking, and now I have a list of topics clamouring for my attention as well as the list of book reviews to write. Er. Anyone got any good inexpensive camcorders they can recommend? As for how they differ from standard blogposts – they’re less precise, more flowy – but then, I don’t exactly work from a script. Good for talking about a general theme, I think, but I’m not sure it would work for something like a book review, where I like to be fairly precise and find I can express myself better in writing.

What’s the best thing about living in Nottingham?

Nottingham is an awesome city – all culture, architecture, nightlife and, if you’re so inclined, shopping, and I live right on the edge of it so have a balance of city centre in one direction and middle of nowhere in the other – perfect spot for a recovering village lass. That wasn’t thing singular, was it? Well, I can’t think of any downsides to it which couldn’t be addressed by the invention of a teleportation device to move people to/from it so we can hang out more.

8 thoughts on “Where Are They Now? An interview with Cat/Koshkajay”