It’s week 7, and on TV they were doing things with suet and choux pastry, which all looked very complicated. The best I managed with suet this week was to put dumplings on top of my steak and ale stew. Meanwhile Asta and Lisa have gone head to head once again, with their fancy-schmancy choux buns, some looking a little more nun-like than others: 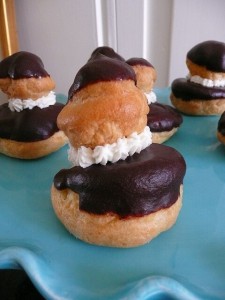 I’d never attempted choux before because the mere thought of it filled me with fear. My mother used to tell tales of her mother’s baking prowess and would finish each story with, ” And she could even make choux pastries, so delicious nobody else in town would even attempt to make those” Obviously choux was the ultimate in skill.  By the time I hit my twenties, I should have factored in that my mother was a fair to horrible cook and that aside from the the annual Christmas cakes, she didn’t bake at all.
I only started baking more than once or twice a year two years ago, and tentatively at that.  I only started to give it any real attention this past winter. So this week’s choux was alarming. Ganache and whipped cream are a snap, but the pastry and the creme filling were total unknowns to me.
I looked at Mary Berry’s recipe.  I followed her recipe for the choux, ( what do I know of pastry), but her recipe for the creme was ridiculous–6 egg yolks? No wonder she added cornflour, the stuff would have made mortar without it.
I have a big ol’ French cookbook from the 80s that I hardly ever look at. I dug that out and it said three yolks and 1 egg were desired. Fine by me.
Results:   These are irreligieuse nuns, so it’s okay that they look like they’ve been in a bit of a fight. They were served at a dinner party with more whipped cream, and berries. I did not tell anyone I made them. I was asked for the name of the pastry shop because the questioner wanted to get some for a gathering next week. SCORE! 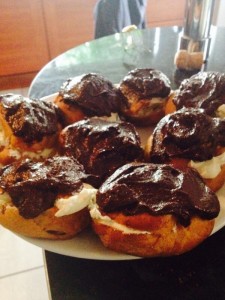 Choux pastry from Delia’s recipe, blobbed with a dessertspoon not piped. Whipped cream/icing sugar (by eye) inside – cba with creme patiserie; and melted choc/cream on top. Not very fancy but taste good.

As usual I have completely ignored the brief, but made up for it in terms of quantity: ale loaf (pictured), rhubarb and marmalade crumble, eccles cakes, cheese and onion pasties, ciabatta and a chocolate sponge: 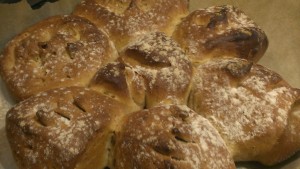 Pixeldiva has produced a marvellous second birthday cake in the style of a gruffalo, from former GBBO-winner Jo Wheatley’s book: 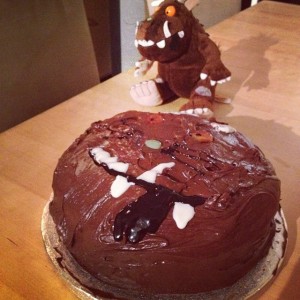