Nearly a whole month on this one, and there’s a good reason for that. 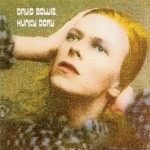 Writing this review means putting Hunky Dory away and moving on to the next Bowie album. I have been a bit reluctant to do this, as I’ve enjoyed listening to it so much. Whereas my interest in the previous albums has been mostly academic, I can state that I genuinely enjoyed this one on its own merits.

The core instrument in the first half of the album is probably the piano. And, to me, it’s the first half of the album that really shines. Three of the first four songs are Changes, Oh You Pretty Things and Life On Mars which are songs that I don’t even know how to describe, because I know them so intimately that it’s like trying to explain the process of breathing. Perhaps best if I focus on the ones that are newer to me.

Kooks is a very cute song that was written for Bowie’s son, “Zowie”, and rang so true with me that I cried. “Kid, your parents were considered weird in school, and if you find yourself in the same boat (which seems highly probable), then rest assured that we’ve got your back.” Though it does leave me with a slightly ironic thought – what if Bernard isn’t considered weird in school? How do I cope with that?

I initially took a dislike to Quicksand because on first listen, the line “I’m sinking in the quicksand of my thoughts” leapt out at me and seemed insufferably trite. Very superficial of me, I know. Fortunately, over time I’ve been able to ignore that line, and the rest of the song has really grown upon me, and not just by a little. There’s a load more piano and strings. I’m really liking this new bepianoed Bowie.

Things go a bit odd in the second half. Fill Your Heart is a somewhat strange choice of cover, and I can’t be sure whether it’s an ironic inclusion or not – at face value, the lyrics are somewhat saccharine, though I feel it would be a bit curmudgeonly of me to dismiss it on those grounds. Then there follows a string of songs that wear their inspiration very plainly on their sleeves. Andy Warhol is exactly as odd as you would expect a song with that title to be, Bob Dylan is a rather accurate pastiche, and Queen Bitch is a very passable Velvet Underground imitation, and a superb song to boot.

And then it finishes up with the far trickier The Bewlay Brothers in an almost overlookable position at the end of the album. Trying to extract sense from these lyrics might be an intentionally impossible task. Things go a little bit off the rails in the last minute, and it doesn’t really tick my personal boxes as a convincing album closer, but so it is.

Hits from this album: Changes and Life On Mars were both released as singles ((though, interestingly, Life On Mars wasn’t released until after the next album)).

Next up: The Rise and Fall of Ziggy Stardust and the Spiders from Mars