We don’t know why it’s Bill Murray day, but it is.

Imagine, if you will, one of those lovely old fashioned picture houses with the little kiosk downstairs selling poppets and munchies, stairs winding up to the side taking you to the gallery, red velvet upholstery and curtains across the stage. ((Such as the Hyde Park Picture House, which was at the bottom of the road when I was a student in Leeds. Memorably, we once went to see Betty Blue there, to the accompaniment of a very wheezy soundtrack. At one particularly poignant moment towards the end, it gave up entirely. The worst part is the silence, read the subtitle.))

As is always the case with uborka, we issue those magic spectacles that make it so that even though you’re in the cinema with everyone else, you’re watching the film of your choice. So Lisa can be all sophisticated with Lost in Translation and a posh Japanese cocktail; and everyone else can watch Ghostbusters, reciting the script alongside. Everyone except uborka newcomer Rachel (drinking her Punxsatawny Phil) and Lyle – they’re both watching Groundhog Day. Again. 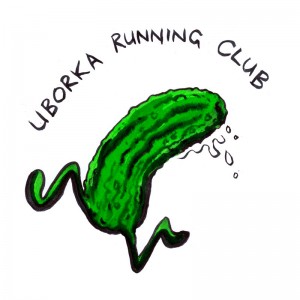 Today we’d like to issue a big thank you to the good Doctor P, along with many virtual pints and the promise of actual pints, for designing the official Uborka Fitness Club #penisbeaker. I mean, logo. Ain’t that a beauty. Have a super weekend, people; wish us luck with our run!

8 thoughts on “Who ya gonna cocktail”