Earlier in the week I gave you my roasted pepper chilli recipe, but I didn’t stop there, oh no. This week has been inspiring but also busy and it’s helped to have the slow cooker in permanent residence on the side. I gave it the night off last night and made aubergine and tomato curry, but actually that could have been nice slow-cooked as well. 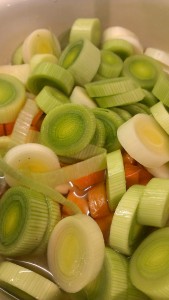 So as well as the chilli, I made a really bad leek and potato soup. This consisted of leeks, potatoes, carrots, pepper, vegetable stock, rosemary and chopped ginger (the latter two ingredients suggested by Lisa). It tasted of absolutely nothing, at which point I grumbled about it on twitter and was variously recommended to adulterate it with worcestershire sauce, soya sauce, sweet chilli sauce, butter, blue cheese, paprika and tomato puree. It remained unpleasant, but the home-made spelt and wholemeal seedy bread that we had with it was quite nice. 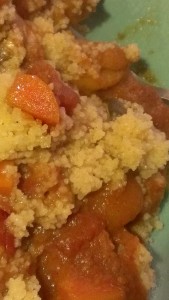 Next I threw together a lamb and apricot casserole, which was much nicer. I used the leftover soup as stock, but added quite a lot of ras-el hanout as well. My Ocado delivery of lamb was very fatty so probably less than 200g went into it in the end, along with all the other vegetables I could find. It was served with cous cous and the leftovers were only about enough for a child’s portion, which is a good sign and also useful.

This week has served to remind me that I do use it for a wider range of food than I thought; I have just loaded up the ingredients for a sausage and lentil casserole. Here’s my recipe, along the lines of my usual approach to cooking:

Get a packet of sausages, cut them in half, throw them in the slow cooker along with about half a packet of lentils, half a chopped onion, a squidge of tomato puree, a tin of tomatoes, and some water with which you washed out the dregs from a jar of marmite. Switch it on low and leave it until later. Wonder when you will have time to make mash. 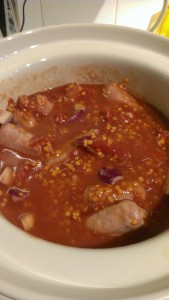 1 thought on “My week in slow cookery”