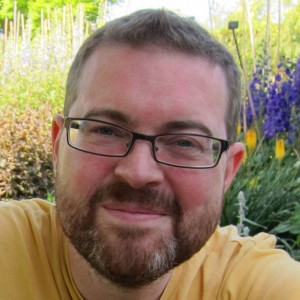 Well, in 2004/5 alone I lived at 4 different addresses, but you wouldn’t find me at any of them now. 2004 was the year I returned to the UK after almost 9 years living in Eastern Europe (mostly Hungary). We appear to have settled in Bristol, but I use the word “settle” with extreme caution. On moving to our current home in 2008, I counted 25 places I’d lived long enough to use as a postal address. My feet may be itchy, but I assure you, it’s not fungal.

Who is this “we” you’re talking about? If you recognised me in 2004/5, I suspect you’d recognise me now. I’m both heavier and hairier, but essentially the same plump-cheeked, bespectacled twerp you may or may not have recognised bumbling down a street in Budapest.

I have one, yes, but I mostly post pictures on it. I have a professional site now, which contains a blog section, where I intended to write about animation and illustration, but where I ended up posting all the pictures that weren’t for my clients. The vast majority of posts are drawings of fat, middle-aged men in underpants.

To make up my mind whether or not to yield to this infernal itching.

I’m not sure I recognise this as an either/or type question. The internet is a vast, uncontainable expression of all things, and this is precisely what makes it wonderful. I see what governments are doing as inevitable, but it will always meet with resistance, and will never be quite perfect. Also, when we talk of governments and fear, I’m compelled to ask “Which government?” I spend a lot of time worrying about the Hungarian government, and with them, there is some genuine fear. The British government are a dreary lot, but to the best of my knowledge, they are not actively shutting down the means I have to resist them. I can say what I like about them, without fear for my family. Increasingly, this is less true of Hungary.

Asta spent some time as a trompe l’oeil muralist and passersby would feel free to suggest what she should paint. Do you run into same? How do you deal with it?

Oh, all the time. I wouldn’t seek to prevent people from making suggestions, as long as they respect my right to completely ignore them. Many people see World Leaders in Underpants and say “you should do celebrities” or something along those lines. Presumably they say this because they are concerned that what I’m doing won’t be sufficiently popular unless I join the orthodox narrative of contemporary culture. In short, they miss the point entirely. With irkafirka, I frequently encountered people who claimed to love it, but seemed not to understand it at all. They also said I should focus more on celebrities. People in marketing frequently cited it as something clever, and tried to bend it to their jaundiced, love-annihilating ends, every time without success.

Once, when I was telling a story to my Granny she paused and looked at me curiously. “You’ll never be rich” she said. She was right.

Do you run into attitude that because it’s cartoon, on internet, it’s not art?

It’s probably best that I don’t worry too much about whether what I do is art or not. This has nothing to do with the means of expression or the mode of distribution, and everything to do with the continued effort not to disappear up my own arse. This is what killed Doctor Pockless (whose name I still use, albeit it shorn of the dubious qualifications).

What inspired “World Leaders in their Underpants”? How many more to go? And what’s the next project going to be?

A drawing of a bear combined with the Arab Spring was its inspiration, and there are about 20 to go. I don’t know yet how I’ll follow it, but it will probably be equally silly, and just as unrewarding.

What, of all your art, is your favourite piece?

It probably wasn’t my best piece, but about 15 years ago I drew a cartoon which made one of my colleagues cry. It was called The Concise Life of Christ, and it depicted a nativity scene in which Mary cradled a man nailed to a cross. He was screaming, and the disciples huddled in the background were saying “Did you get that down?” as one of them scribbled in a vast book. I proudly blu-tacked it to the wall of the teachers’ room in the school where I was then working. It remained there until the aforementioned tears. Presumably she was moved by the poignancy of my work. I’m not sure, because she never spoke to me again.

Do you make sketches as souvenirs?

Yes. But rarely on purpose.

Would you ever consider doing a self-portrait in your underpants?

I’ve never mastered the self-portrait, but if I did, you’d probably prefer it if I were fully clothed. Psoriasis isn’t pretty.

Next we hope to interview our old friend Destructor, who you may remember from various past cocktail hours. Let us know your questions!

4 thoughts on “Where are they now? An interview with Dr Pockless”