Posted by Karen on behalf of Swisslet.

A few years ago, I was inspired to start mixing cocktails by an appalling mojito served in a restaurant. Mint, rum, soda water and ice does not a mojito make.

“There’s plenty of rum in there. What more do you want?”

I knew I could do better. Making cocktails is like science, isn’t it? It’s about getting the right components together and then assembling them in the correct ratio. I don’t use any old rum, I use Havana Club, but even the best rum is pretty much useless in a mojito if it isn’t in harmony with the other ingredients, and the humble lime is every bit as important here as the spirit. In other words, mixology, for me at least, is not an art. 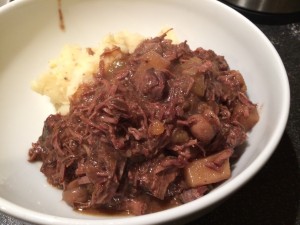 Cooking? Well, now you’re talking. That’s about an instinctive understanding of flavours and chucking stuff together to see what works. Right? With that in mind, the ingredients for my nice warming winter stew may be somewhat approximate. Don’t worry – the results tell me that it’s basically idiotproof.

A handful of button mushrooms

A stick of celery

A couple of carrots

A couple of reasonably sized swedes

A tin of anchovies

Strip the sinew from the edges of the shin and cut the meat up into decent sized chunks. The skirt will go all strandy and delicious when it’s cooked, and all the sinews and stuff in the shin will melt down and add richness to the dish. Mmm. Nice cheap cuts too. Dust each piece in some seasoned flour and sear in a hot pan (I use a big Le Creuset cast iron pot that you can use on the hob and in the oven). Don’t do the whole lot at once though, as the meat needs to sear and not boil in its own juices. Do a bit, take it out, put some more in, adding fat as needed. I use butter, but I’m sure any other kind of fat/oil will be just dandy. 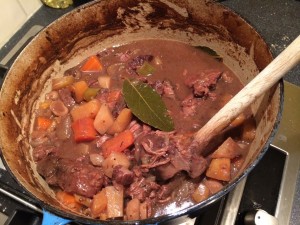 The long cook will have enabled the beef to break down beautifully, the veggies will be soft and earthy and the liquor should be all dark and savoury. On a cold winter’s night, what’s not to like? The best thing about this recipe is that you can mix and match. I’ve made it with beer or stout instead of the wine, with turnips instead of beetroot, with or without mushrooms and with lots of different cuts of meat. It’s pretty much all good. Whatever you’ve got, chuck it in. Casserole was my favourite dish when I was growing up, and my mum still occasionally makes it for me when I go home to visit. It’s a homely, unfussy dish and it’s very forgiving of idiots like me throwing inexact amounts of stuff into a pot and letting it stew in the oven for hours. Perfect. Enjoy.

I watched telly while this one was cooking, but I’m sure you can probably practice your mojitos too.