Posted on Stroppycow’s behalf by Karen. 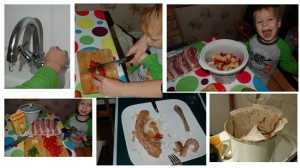 Ingredients:
Pork belly slices
A tin of pineapple chunks in juice (if you don’t have any you can chop up an apple and use ginger beer or apple juice instead of pineapple juice and drop the chilli and pepper)
chilli – amount and type to taste
a tablespoon of cornflour
a pepper
ginger – to taste (we used a cube of frozen crushed ginger)
First ask your trusty assistant to wash their hands because you know where they have been.
Chop the chilli, it’s best to do that step yourself, especially if your assistant has a history of poking his father’s eyes.
Get your assistant to practice his knife skills chopping the pepper. If your assistant is left handed and you are not, this step may take slightly longer than if you did it yourself, allow extra time.
Hand a spoon to your assistant and ask them to spoon some pineapple and pepper in the cooker, add some chilli and ginger and some meat, keep layering the meat and flavourings until you are 2/3 up.
Ask your assistant to mix the cornflour with the juice in the pineapple tin (it’s a low washing up recipe, no need to dirty a cup). Once well mixed, ask them to pour it in, put the lid on top.
Because of the small person in the house, we only add salt after cooking, this assuages my conscience when I give in to his begging for salt laden goldfish crackers. If you do not have to share your food with a small person, I would advise adding salt.
This next step is completely optional. Pack the slow cooker into the boot of the car and travel to North London to see some friends who have bought a flat and whose kitchen is lacking basics to give moral support while they paint ceilings. Plug slow cooker in friends’ kitchen. Bring the rice cooker too and plug it in.
This step on the other hand is important: turn the slow cooker on. If you have plenty of time put it on slow, if you have overfilled the slow cooker and / or time is short, put it on high until you see some bubbling then switch to low until you are ready for dinner (4 hours maybe?).
Dish up, why yes you are correct, the dining table does look a lot like a mini table tennis table, it could be because it is a mini table tennis table.
A word to the wise though, do not let the person with a reputation for clumsiness attempt to clean the ceramic insert of the slow cooker for you unless you were thinking you would like a new one (like I was) as it may be the last ever dish cooked in it.