“Is this the right place?”

“This is the address on the invitation.”

You push open the front door. The house is tidy, but cluttered. Every surface has an ornament on it. The only sound is the ticking of a clock on the mantelpiece, and something that sounds like distant roadworks. Walking through to the sitting room, you see an old lady sitting in an armchair with doilies on the arms. There is a sofa, and there are cats sat on it. There is a rug in front of the fire, with cats sat on it. In the kitchen, there are some cats, and there are some cats in other places too.

Moving through the house, you see a crowd of people in the back garden. In the light of allergies and various dislikes, it seems that the party has quite wisely relocated as far away from the cats as possible. You weave your way through the chicane of bowls on the kitchen floor, and soon you are out in the fresh air again.

Karen originally ordered a saucer of milk, but I know that she’s just going to spill it down her front, so I’ve transplanted it into a glass and added some vodka, kahlua and ice. She is showing people this photo of Pigger, from more than ten years ago: 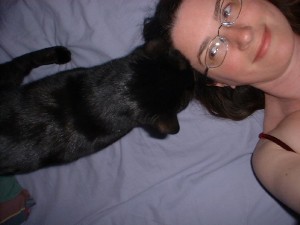 Sevitz seems to be recovering from his gauntlet run through the house, with the aid of suitable medication and a bottle of bourbon. He has requested a dog, so I’ve given him this one. 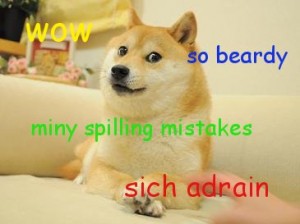 Treasure this, I spent ages on it

For Graybo, a very ugly cat with a not-too ugly-sounding drink, the Pink Meow. I might give that a try myself sometime. Pigwotflies couldn’t be better prepared for this event, as her aunt’s cats were called Whisky and Soda. To minimise the number of bottles that we had to bring to this barren land, the whisky in question will be some of Sevitz’s bourbon.

Still on the Kamikaze is Lyle. He was in a grumpy mood earlier but I’m betting he’s still sniggering from Sevitz’s doge. Ah fuck it man, here’s one for you. Don’t click this unless you like 4-letter words. 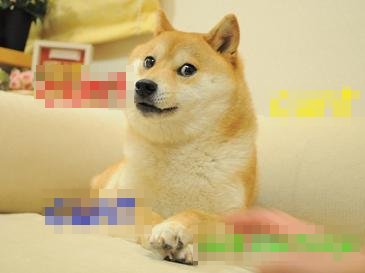 Lisa is receiving consolation, and brandy, from Asta, who is herself drinking a Black Cat. The sombreness of the mood is suddenly shattered by the appearance of a lubricated pig being chased by Gammidgy who is dressed in dungarees and chewing on a stalk of wheat. There’s a cider with his name on it, but he’s not in a position to take a swig right now. They charge through the midst of our entourage, scattering drinks left right and centre, with a typhoon of pirouetting felines being dragged along behind like cigarette packets in the wake of a juggernaut. Chaos erupts. Lyle swears. Adrian puffs up like an exotic fish. Asta jumps the back fence and disappears off down the lane.

Suddenly, the shed door bursts open. Holy moly, out comes a pig composed entirely of anti-matter (imagine such a thing). In seemingly slow motion, we watch as the pig and the anti-pig hurtle towards each other, on a perfect collision course. We’re all d

2 thoughts on “Cocktails and Furballs”