Bernard and I have just finished reading Danny the Champion of the World, which is my favourite Roald Dahl book. I was struck by the part where Danny and his dad walk a mile to school, down country lanes, and his dad always has something interesting to tell him about the things they see and hear on the way. Our walk to school takes five minutes, from the end of the cul de sac, across the road and round the corner. We spot such gems as other people’s recycling boxes, cars parked on the double yellow lines, and kids on scooters.

Alongside this maternal pondering, it has become apparent that Bernard doesn’t seem very engaged with school this term. Sleep is always the barometer of his wellbeing, and I know things aren’t right when he’s in a phase of 5.30am waking.

So I have come up with The Notebook, which is a school exercise book with squared paper. His topic at school this term is geology (“we’re doing stones,” he told me); so I did a little research and then wrote a paragraph about igneous rock in colourful felt tip pen, and left the notebook in the chair where he usually sits when he comes down to watch television before sunrise.

I came downstairs to find it politely put to one side.

That evening, Pete filled a page with a history of space travel. In the morning Bernard informed me he wasn’t really into space (despite having spent the entire previous day flying a Kerbal rocket to the moon).

I copied out a poem by Robert Louis Stephenson. This was ignored completely.

I wrote out a list of types of scientists (e.g. botanist: studies plants, etc). This was brought to me in the bathroom. “Why isn’t archeologist on the list?” Um. I don’t know. You could add it. So he wrote Archeologist uncovers discovers things. Some found King Readwald’s ship burial. He then took the book to school for Show & Tell, and this morning wanted to know why I hadn’t written anything down in it for him last night (because I was working last night). 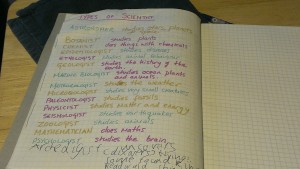 Which brings me to why I have been asking for comparisons between 1977 and today, which is for a page entitled What The World Was Like When Mum Was Seven. I’ve also been researching what all the great-grandparents did during WWII, and trying to think of some other ideas that will appeal to him. It’s interesting to see which items strike a chord. I’m trying a little bit to tie in with things we will be doing, but also to explore new things he might not have thought about before. My bright, unpredictable boy so often surprises me, and it’s very gratifying to find something he takes to heart other than Horrid Henry books.

7 thoughts on “Notebook of Champions”