I learned to cook when I was at uni from a book called Cooking In A Bedsitter, which assumes you have few skills and little equipment. This is perfect training for cooking outside a tent on a single gas ring with a non-stick pan that definitely sticks. 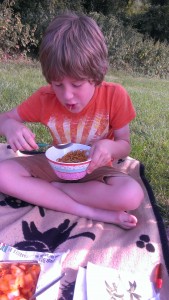 The first thing to note is that now I’m a grown-up I can afford to eat out, so our catering plans usually involve a pub lunch and a long-standing tradition of pizza on the way home on our last day. This weekend we instituted the tradition of first night chinese takeaway. So there is only a minimal amount of cooking involved, really.

Breakfast could be home made granola, buttered malt loaf, toast from the awesome tea van, scrambled eggs, or (most likely) bread and jam. Pete makes proper coffee (even in a field, we don’t do instant), and Bernard has recently discovered that he likes yoghurt drinks (the ones with the good bacteria, or the cheap Sainsbury’s For Kids alternative).

Lunch If you lunch in the pub you won’t want much dinner. Or for cheaper alternatives, or it it’s too many days since you had a shower, then pasties. If you must cook, heat up a tin of soup.

Dinner [n.b. we are northern and we call this meal “tea.”] This is where it gets really interesting.

A good first or second night option is pasta with frozen bolognese sauce. Obviously you will want this to be defrosted (ours wasn’t, hence the chinese). I use a plastic lidded takeaway tub to freeze enough sauce for the three of us, pack it frozen in the cool bag, and along with the ice packs in there it keeps everything cold and is usually defrosted either that evening or the next. If you’re eating it soon, take fresh pasta from the supermarket, which cooks in 4 minutes. Boil the water, add the pasta, simmer for one minute then remove from the heat. Put the lid on and leave it in the water while you heat the sauce. The pasta will be cooked through by the time you need it. If you’re using pasta later in the week you might be better off with quick-cook dried pasta.

If available, we like to buy local sausages or bacon, which you could just fry and eat with bread. For an apparently healthy but strangely child-appealing alternative, try Dr Pockless’s Bulghur Pesto Salad. Take one mug of bulghur in a small pan, stir half a jar of pesto through it (the classic green is nicest), add two mugs of chicken or veg stock and put on the gas ring. Bring to the boil for about a minute, stir thoroughly, and switch off the gas (now put the sausages on). Add to your bulghur: some chopped spring onions, a dash of lemon juice, some grated parmesan. By the time your sausages are cooked, the bulghur will have absorbed all the liquid and be nicely edible. Use up the rest of the jar of pesto the next night, stirred into some pasta. Then use up the leftover pasta the next night, with a ready-made sauce from the supermarket (tomato and mascarpone is our favourite). 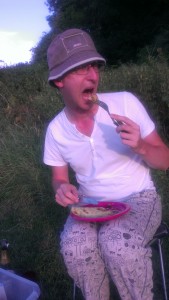 Something else you can do with bacon is pancakes. I tried this for the first time this weekend and the pancakes were not pretty; Gregg Wallace would have grimaced at them. But they tasted fine and were wolfed down by the rest of the clan. I measured out the flour into a takeaway tub, added baking soda, and took a couple of eggs with us just in case we couldn’t buy any. Cook the bacon first and keep it warm under an enamel plate. Then cook the pancakes in the bacon fat. Maple syrup would be a useful condiment. When the bacon was finished, we spread honey on the rest of the pancakes.

Straight-to-wok noodles are great because they cook in seconds and don’t need to be kept in the coolbag. You can rustle up a stir fry with any old random vegetables, and add pre-cooked chicken from the deli section of the supermarket (you can get this with a chinese flavouring, or use a small packet of stir fry sauce). Add noodles to boiling water, then remove the pan from the gas, cover, and fry the veg.

Cous cous cooks quickly, and you can throw in chopped avocado, tomatoes, mushrooms, cucumber etc. If you don’t call it a salad, the kids will be more likely to eat it.

Swedish meatballs cook quickly and can be served with pasta or rice. If using rice, precooked packets will save time and gas.

Baked beans are a useful camping staple. You can just heat them up and serve them on bread or toast. Or you can fry some bacon and onions, throw in some paprika, and then add the baked beans. If you serve this with rice it’s almost sophisticated.

That, then, is a week’s worth of meals. All that remains is to mention that local strawberries, large bags of crisps, and marshmallows are essential. And if your child, like Bernard, gets up early, take a packet of brioche and throw one at him for first breakfast. This will buy you another half an hour in your pit, until the sun soaks into the tent and makes it unbearably hot.

3 thoughts on “The Uborka! Guide to Camping: Food”