Just some ideas to make your camping trip easier. Don’t forget the Big Uborka Giveaway! A copy of The Camper Van Cookbook for the best tip left in comments by 14th August. 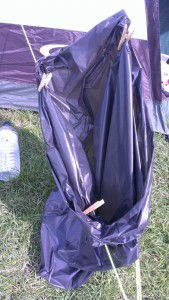 And here’s how to arrange your bin bag – peg between two guy ropes so it’s open; peg closed at night. The black bag was supplied by the campsite; normally I’d use something a lot smaller, like a supermarket plastic bag.

3 thoughts on “The Uborka! Guide to Camping: Top Tips”