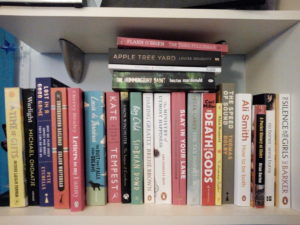 A cursory search of Uborka suggests that I don’t keep you very updated on my reading material anymore; the last decent set of book reviews was some holiday reading from 2014. On tweeting my To-Read Shelf [left], Uborkite Graybo asked if I would be reviewing them all. Not bloody likely, I replied. Then I relented and offered a top five of 2019, and here it is.

1 thought on “Six of the Best”