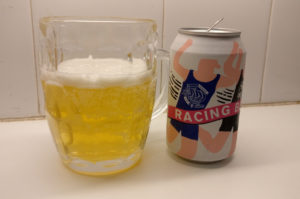 This poured a very pale, clear straw colour. The initial aroma set my expectations for something smooth, refreshing and lagery, with a little tinge of sourness slotted in with care. I took a first sip, and bam, it was like drinking Lilt. This beer is insanely tropical, in fact, I’m not sure I’m even comfortable calling this a beer. It is basically Lilt for grown-ups. It’s not a bad drink, but I probably wouldn’t order it again – it just a bit too weird. 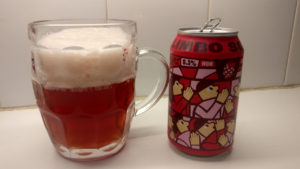 Another weird beer from Mikkeller, this is a spectacularly pink, spectacularly raspberryish beer. I took a cautious sniff and began to worry that I had ordered an alcopop by mistake. The flavour is, like the Racing Beer, supremely sour, and the flavour of this drink actually invokes more of an unsweetened rhubarb experience than raspberry. Again, it’s quite nice if you’re looking for a tangy fruity drink, but if you thought you were buying beer, you might be a bit disappointed. 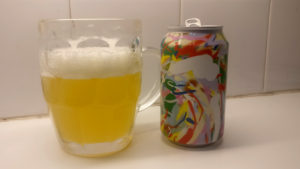 Pale and cloudy, with a pleasant smell that sets you up for a wheaty beer expectation. With these expectations set, I took a sip, and was caught completely unawares, as seems to be happening a lot with this batch. It’s not a bad flavour, but definitely a surprising one. It’s hard to describe – it’s tangy, but in a creamy sort of way, like a yoghurt in beer form. I would definitely not decline this if it were offered again, and in fact I can see myself ordering half a dozen of these when I’m doing another beer order at a future date.

Unfortunately, given the coarseness of my rating system, this merits only one “full pint glass”, which is a bit of a shame as I liked it quite a lot more than the two above. 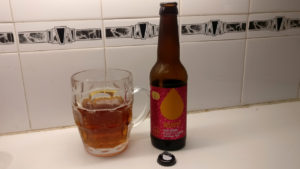 I made a bit of a mistake the other day. I saw a voucher online for 50% off a Big Drop selection box when purchased directly through their website, and placed an order for a couple of boxes (24 bottles in total). It didn’t occur to me until a bit later that I’ve had quite mixed experiences with Big Drop, and had made a bit of a mistake, as while my box contained 6 bottles of their Pale Ale (which I loved), it also contained 6 of their stout (which I did not like first time and did not like when I tried it again) and 6 of their citra (which I also did not). Ah well, maybe the Uptown Craft Lager would redress the balance.

This poured quite dark with a hint of worty smell, so on the basis of that, I was expecting something a bit like San Miguel. However, upon putting the glass to my lips, I realised that it was actually more like Budweiser Prohibition – just fizzy water with no body or discernible flavour whatsoever. A bit disappointing, but it serves me right for getting all excited by that 50% off voucher.

It’s probably going to be a while before the next batch of reviews. I’ve still got a decent stockpile of beers in the garage, so I won’t be placing another order in the near future, and I’ve only got one beer in the stockpile that I haven’t reviewed before. That said, if any brewers out there want to send me a sample for consideration, then I would be amenable to that arrangement.