As you may remember, we started playing Pandemic Legacy with Gammidgy and Susan back at the start of 2020, with the intention of completing it within the year. We managed to get through the first 3 months of the campaign reasonably successfully, before a real-life pandemic got in the way. Yesterday we met up to pick up where we left off. Most of us had also used the previous blog post to jog our memories, as it has been a long time.

We had to spend a lot of time re-reading the rules before this game as it’s been a long time since we played, and there was a lot to remind ourselves of. The initial mission briefing was basically just to keep playing the same rules as per March, but a reminder token was placed on the third infection tracker square, so we all knew that something big was going to happen before too long, and it seemed highly unlikely that it would be good news. We also had a win bonus from March allowing us to place a military base anywhere on the board, so we slapped it in Shanghai.

The initial infections were heavily skewed towards East Asia – the red disease, the one that we can’t cure or treat. We knew that we would have to allocate a lot of resources to staying on top of that. We chose Wei the Dispatcher (played by Susan) and Ewan the Quarantine Specialist (played by Karen) – these two characters have a relationship which allows them to take an extra action if they start their turn in the same city, so it made sense for them to stay together. The other characters we chose were Eric the Medic (played by me) and Derek the Operations Expert (played by Gammidgy), partly for their general usefulness, and also because the relationship between Derek and Wei meant that they could freely transfer city cards without needing to be in the same city. These two would be primarily in charge of dealing with the 3 diseases across the rest of the world. 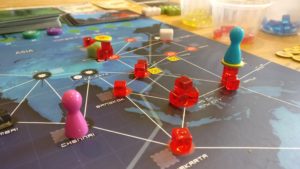 Early in April, the red disease is going bonkers already

The advantage of so many of the initial infections being for the red disease was that the remaining three looked very manageable. Indeed, we cured (and eradicated) the black disease very early on, which meant that one of our optional objectives was ticked off. But we still needed to find cures for blue and yellow. The blue disease was staying manageable, but an epidemic in the yellow region meant that it started to look very hairy, and the constant managing of the quarantine tokens over in the red disease area meant that we had few resources to make much headway in the rest of the world.

Eventually the second epidemic came out, and the bad news that we all knew was coming. Turns out that the red disease has mutated further (oh can’t we please have a break!) and we’re now fighting a zombie virus. 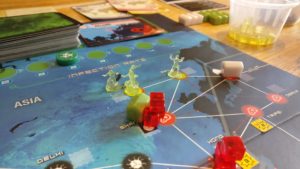 The little green zombie figurines (the “Faded”) replace the red cubes. They have the same rules as the red disease (can’t be cured or treated) but with the additional rule that when they outbreak into an adjacent city, they can also convert that city into a Faded city. This means that our untreatable disease now has the capability to spread beyond the red zone and into other areas of the globe. There’s another rule, that any player starting their turn in the same city as a Faded immediately gains a scar.

At this stage in the game we were still fairly optimistic that blue and yellow could be kept under control, however we weren’t holding many of the blue and yellow city cards in our hands, and were struggling to consolidate them into one person’s hand so that they could then get the cure. This is unfortunately quite common when playing Pandemic with a large number of players.

In an instant, chaos erupted in East Asia. A cascading outbreak meant that within a matter of minutes, all hope was lost, and the game with it. Many of the cities over there went from being merely unstable to full-blown riot in the space of a couple of turns, and the Faded have spilled over into Kolkata and also found their way across the Pacific to San Francisco. Hong Kong is now a collapsing city, meaning that it now can’t be entered without discarding one red city card. 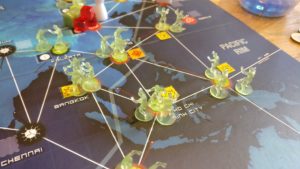 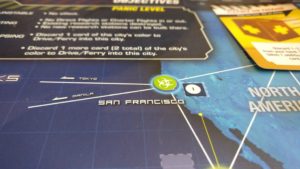 Wei (the Dispatcher) had also picked up a scar as a result of unavoidably starting their turn in a city with a Faded. This scar reduces their hand limit by 1, but to be honest that’s not a huge handicap, as with this many people playing we rarely find ourselves bumping up against the 7 card hand limit anyway.

While looking through our options for our two end-game upgrades, we observed that having eradicated the black disease again, it might be worth picking up another positive mutation for it. At this point I realised that in the previous session we’d actually cheated slightly by selecting positive mutations out of order – the rules actually state that the mutations on each disease must happen in a specific sequence, and we’d overlooked that. Still, my personal policy is that cheating is only a problem if it makes the game too easy and it stops being fun, and this game is definitely not too easy. We decided that, in the interests of fairness, we’d attempt to make a start on “filling in the gap” by choosing the tier 1 positive mutation for the black disease. 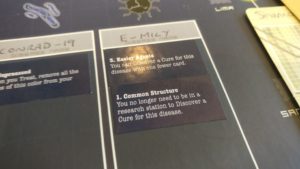 Filling in the gaps

For our second end-game upgrade, we decided that the military base in Shanghai was worth turning into a permanent structure so that we’d automatically have that on every game.

The second game got off to a fairly strong start. We kept Wei and Ewan over in East Asia with a similar strategy to before, but swapped out the other two for Moira Rose the Scientist (played by Gammidgy) and Shannon the Researcher (played by me) in the hopes of being able to shift city cards around and cure diseases a bit quicker. The initial allocation of infections was a bit more balanced across the colours, and indeed we had some fortunate early luck that meant that by the time that we’d each taken our first turn, we’d managed to get four blue cards into the Scientist’s hands and they’d cured that disease already. In the meantime, black was going down the toilet at the same time, and a double outbreak meant that it was looking very hairy.

Yellow also quickly started to look troublesome, however by the end of our second turn each, it started to feel like we’d established a decent holding pattern and could maybe stay on top of this.

We soon found a cure for the black disease, and there were only a small number of blue cities still containing infection. I was running around back and forth across Europe and North America trying to eradicate it completely, so that we could stop worrying about it, but every time I cleared a city it would pop back up again. Meanwhile, San Francisco was slowly accumulating Faded, and was in danger of overflowing, which would then mean that Chicago and Los Angeles would become Faded too. However, we felt like we weren’t far from winning. The scientist held three black city cards and three blue city cards in their hand, meaning that they already had enough to cure the black disease, they only had to get back to a research station. And one more blue city card would enable them to cure the blue disease too. All that would then remain is to eradicate one of the diseases, and both blue and yellow looked achievable. We could win this! 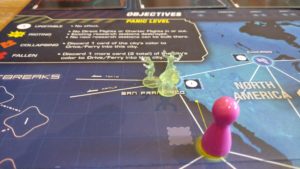 Once again, the rug was snatched out from under us by an epidemic, this time in the black region. The cascading outbreaks meant that the counter fell off the bottom of the track in seconds, and three cities there (Moscow, Tehran and Baghdad) are now in a state of rioting. 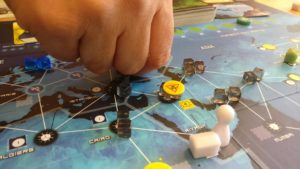 In contrast, we’d managed to stay on top of the situation in the Faded region, and none of the cities worsened. Maybe in hindsight we over-allocated resources there this time?

For our two end-game upgrades, we deliberated for a long time before choosing the following two: firstly, Wei no longer gets a scar for being in an outbreaking city. This we deemed useful as Wei already has one scar, and once a character gets up to three scars then they are out of the game permanently. 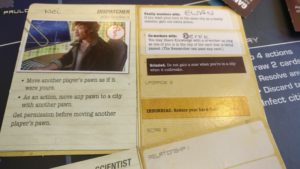 The second upgrade was to grant ourselves another unfunded event card. The Manila city card is now an unfunded event that allows us to remove one Faded figure. 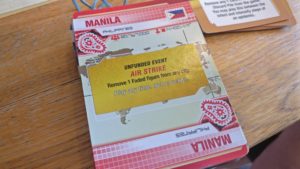 The State Of The World After April

Having lost April twice in a row, we will move on to May in the next session. We don’t yet know what rule changes will be introduced – let’s hope it’s good news. But we do know the following: 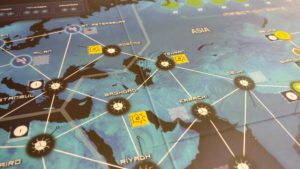 On the whole, losing twice in a row was very disheartening. But hey, that’s dealing with pandemics for ya.