Long story short, we were on holiday last week in the Peak District with my mum, she broke her hand and I had to drive her back to Armpit. She’s in a cast and I’m stuck here for a fortnight opening jars and ferrying her around.

On the upside, she lives 0.31 miles from the sea. Back in March she joined the self-styled local Mermaids, and took to swimming in the grey North Sea. Here’s what it looks like on a good day in the middle of summer: 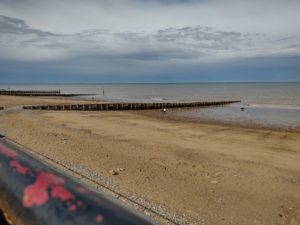 Not to be outdone, I took a couple of dips in a pleasant inland lake in Berkshire on the hottest days of the year. It was 26 degrees in the water and there are buoys to mark the course. You really can’t get lost in a lake.

When mum arrived in Derbyshire last week, we had a semi-spontaneous swim in the River Derwent just below Chatsworth, which was rather lovely. It reminded me of the river of chocolate in Charlie and the Chocolate Factory, so dark and slow that we couldn’t make out which way the water was flowing. We were in the middle of a heatwave and the chocolate river left us refreshed for the rest of the day.

And now here we are in Armpit, a forgotten seaside resort that does not participate in national heatwaves. Mum can’t swim because she’s got a cast up to her elbow, but that doesn’t stop her egging me on. She took me down to look at the sea on our first day back here, and I shivered on the beach while her swimming group showered her with condolences and kindness. The sea did not look inviting, but the enthusiasm of the Mermaids really did.

Day two, this time I’m wearing swimming gear and I’ve got my float (you always need a float in the sea). The waves are up to 2 feet, but 6 seconds apart, and this is judged acceptable (there is a clever app for surfers – if it says it’s good for surfing then it’s too rough to swim). Nervously, I walk down to the sea with one of mum’s buddies, thinking I might go up to my knees. This is my rear view: 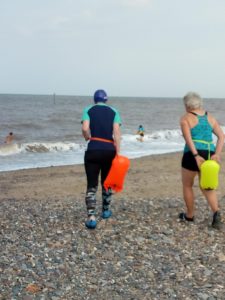 And it turns out to be bloody brilliant. A cold shock as the water hits your warm bits, and then the body quickly adjusts. The tide was in so it was a swimmable depth, a little bouncy but not unpleasant. The Mermaids bobbed around, gossipping between occasional bursts of crawl, and a small group hung back to support a nervous newbie. I swam out beyond the breakers and looked back at Armpit from a new perspective.

The next day the sea was flat and the tide was out so it’s a long walk before it gets above your waist. It was still no inland pond in Berkshire, and all the better for it.

The next day, after a night of heavy rain, there was sewage in the sea so no swim; also I had to take mum to have an op on her hand, pins and stuff inserted.

Yesterday evening we Mermaids gathered on the beach, despite the app saying it was a good day to surf. Waves over 2 feet and 2-3 seconds apart, and two beginners who felt they would probably only paddle. But we know we won’t get in again for nearly a week, according to the app, so we brave it anyway. The breakers knock us down as we edge our way crab-like into the sea. Near the shore, they slam into your chest, knock you down on the sand. Further out they smack you in the face and try to pull you down. If we were more nimble, we could ride them into shore. Beyond the breakers, we swim up the rising waves like brave little boats being tossed around the ocean, screeching and spitting out saltwater, laughing until our jaws ache, until we are dumped back on the beach and start to feel the cold.

There is absolutely nothing like a swim in the North Sea.