Well it turns out that being on holiday in a self-catering cottage gives me ample opportunities to chip away at my “to review” stash. In hindsight, this shouldn’t have been terribly surprising really. Had I been more bold, I could have easily finished off the entire backlog by the end of this week, but sadly I didn’t bring them all with me. 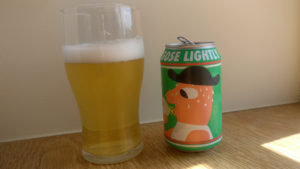 This beer is fairly pale and clear with a good lingering head. The smell is a bit pineapple (“totally pineapple” – Karen) with a bit of something else sour in there. Maybe rosehip? The flavour is tonguesmashingly sour and acidic. If that’s your sort of thing then I’m very happy for you. 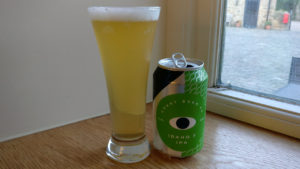 This one has a pale straw colour and is slightly cloudy, with a compact but generally pleasing head. I couldn’t really detect anything of interest in the smell – it’s perhaps one of the most neutral-smelling beers I’ve ever known, though I had just come in from a game of tennis, so it’s possible that my scent receptors were currently asleep after a barrage of sweaty people and those pungent rubbery grips that you get on tennis racquets. Karen took a sip, as she so often does, and remarked that “it tastes like something’s died on your tongue.” Seemed a bit harsh to me. I thought that it wasn’t so bad, it’s fairly hoppy and refreshing. There’s a flavour of some obsure fruit in there that I wasn’t able to identify. I consulted the tasting notes and it says tropical fruits, mango, grapefruit. Yeah, might have been one of those. 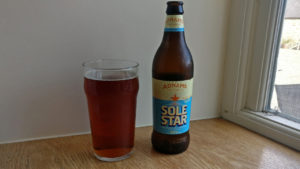 I had a particular interest in this beer because I really want to like Adnams Ghost Ship Alcohol Free, but failed to find myself being thrilled by it, so hoped that this one might deliver. It’s got a lovely deep ruby colour, and is clear with a hint of head. The aroma is also very inviting, with maltiness and a nice warm berry aspect too. The flavour has some promising proportions, but is let down by being a bit watery and metallic. I gave it to Karen to sample and she very nearly made “the face” but not quite. She said “interesting aftertaste. Floral.” To my surprise, she then went back in for another sip, and this time left me with “malty”. I really did think that this beer would make her pull “the face” but I think she’s starting to get accustomed to beer. Maybe she’ll never pull “the face” again. 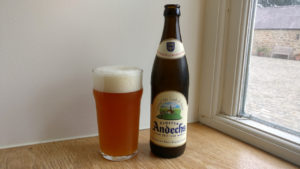 As I was pouring this beer, that deep cloudy orange colour and thick creamy head, coupled with the hearty biscuity fruity aroma took me right back to one of my favourites, Maisel’s Weiss. The flavour also bears a striking resemblance, though on balance I would definitely take the Maisel’s over this any day, as this one does have a hint of something fishy that works against it. Still a superb beer though.