It took us a while to set up the game, as Gammidgy and Susan have two new kittens, who are incredibly cute but distracting. Eventually we managed to gather our focus, and things could start happening.

We decided to start using the Generalist. Their special skill is that they can take 5 actions per turn instead of 4, which sounds a bit unglamourous, but once we start adding character upgrades and relationships to this character they could potentially become very powerful. We named them Jonesy, after the cat in Alien, and completely forgot that we could give them a relationship with an existing character. We addressed this at the end of the game. Our character selections were:

The initial allocation of disease cubes was a bit wonky, with not a single blue cube out. For the first few turns we felt like we were staying nicely on top of everything, though we weren’t making much headway in terms of getting colour groups of city cards into players’ hands.

The first epidemic occurred in Montreal, which suited us well, as it looked like the most threatening region was probably the Faded cities. That said, the quarantine tokens were doing their job nicely over there, so we weren’t too stressed.

After the first epidemic

With black well under control, we narrowly dodged an outbreak when Susan cleared the blue cubes from Montreal on her turn and then immediately drew Montreal from the infection deck. With four black cards in my hand (enough to cure the disease) the Faded cities were starting to become a cause for some concern.

The next epidemic occurred in New York, a blue city. Handily, the blue disease has the mutation that allows us to remove all cubes from a city in one action, so it was barely an annoyance. 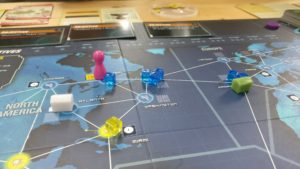 Thanks to a positive mutation, Susan was able to clear all these blue cubes in one turn, leaving not one single blue cube on the board

Colonel K*D was over in East Asia single-handedly trying (and struggling) to stay on top of the Faded cities. One of our optional objectives is to have quarantine tokens on 7 Faded cities, which nicely aligns with our need to keep those cities quarantined for our own safety anyway. 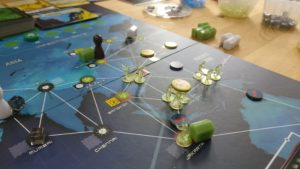 This doesn’t look good, does it?

We found the cure for the black disease, but those Faded cities were still a problem. We managed to achieve one of the optional objectives, which is to have a military base in each of the 6 regions, which means that the optional objective to have 7 quarantined Faded cities was no longer so pressing. The third epidemic card came out but it was another fairly inconsequential location (Sao Paulo) so we were all feeling quite positive. This was one of the best games we’d had in a long time!

We knew that a double outbreak in East Asia couldn’t be avoided for long, and indeed it eventually came. Managing this area was seeming like an increasingly doomed endeavour. We had another lucky epidemic draw – this time Cairo, and since the black disease had by now been totally eradicated, no cubes needed to be placed. The black disease being eradicated also meant that we had ticked off two optional objectives, leaving only the mandatory objective to find cures for blue and yellow. However, as a consequence of the epidemic, you also reshuffle the discard pile back onto the top of the deck, and this resulted in more outbreaks. Our chances of winning this game were looking vanishingly small. Ho Chi Minh City now joins Manila and Hong Kong as being fully fallen cities. 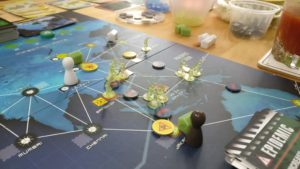 At this point, we knew that the game was pretty much unwinnable, so we started to focus our efforts on damage control, basically making sure that the Faded didn’t spread to any new cities, and that no cities degraded further, as these losses would be permanent. We got another lucky epidemic draw in a black city, but that wasn’t enough to save us.

For our game-end actions, we did the following: 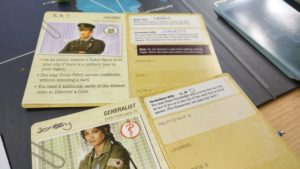 Now at this point we had lost 4 games in a row, so should have opened box 8, but we entirely forgot. We might do that at the start of the next game.

The missing briefing for June brought only good news – we have access to new equipment, which takes the form of little stickers that you can apply to city cards in your hand when you’re in a research station or military base, which then give the city card a permanent second purpose – more about them when we get to them. We also have a new player, the Soldier. He has a couple of useful abilities for fighting the Faded, but the disadvantage that he can not discover cures at all. We named him Pike and gave him the relationship of “Rivals” with Ewan, as it felt like he would be liable to end up with a handful of city cards that he can’t use (as he can’t discover cures, and might struggle to meet up with other characters to trade cards) so this seemed like a good way of getting those cards into Ewan’s hand. 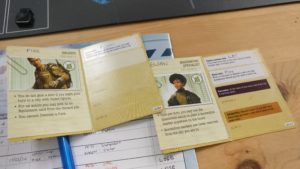 Don’t tell him your name

The initial allocation of cubes was an odd one, with a cluster of blues in North America and a few Faded outside of the usual danger zone. This was potentially good news, as the blues could be removed easily in a single turn (thanks to the positive mutation on that disease). The Fadeds were a bit more of an unknown quantity – on the plus side, they were all in cities that we could get into easily, making them easy to manage. On the minus side, if outbreaks started occurring up there, then we’d find ourselves with more unmanageable Faded cities on our plate. 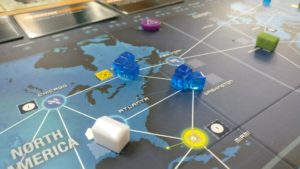 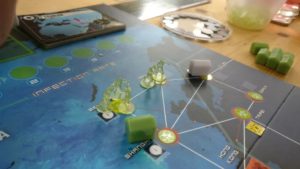 Our character choices were:

The overall plan here was to put a bit more resources into managing the Faded cities, as that was basically what tripped us up last time. We were playing without the Dispatcher for the first time in a long time, perhaps even ever, which made us a bit hesitant, as they’ve been a really useful character. However, the four above seemed the most sensible team right now.

Early game I leaned hard into exploiting the new equipment options. I upgraded one of my red city cards to have a “Induced Pluripotent Stem Cells” capability, so that it could be used as a wild card (ie any colour) when finding a disease cure. I used this card as the necessary “payment” to get through the roadblock from Shanghai to Beijing (which K*D had created) and Ewan was able to then pick it up by discarding two city cards. I also upgraded one city card with the “Grenade Belt” option as this seemed to have huge potential for my character. 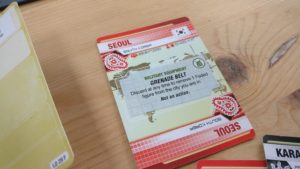 With the Soldier’s ability to pick up any equipment from the discard pile as an action, I could keep playing this card for its effect, and then picking it back up until I ran out of actions for my turn. Of course, it wouldn’t be a Pandemic Legacy game without a misreading of the rules, and I played through the entire game without registering the “Not an action” note, so as a result using two actions per usage (one to use, one to pick back up) when I should have been using just one.

The first epidemic came out, and it was in Taipei. We immediately played a funded event card (of which we have 8 in the deck now, thanks to our losing streak of 4 games) to remove Taipei from the deck for the remainder of the game. This would mean that we could stop worrying about Taipei entirely (unless nearby cities started to outbreak, of course).

Other examples of some of the fantastic new equipment available to us are the Drone Escort (which acts as a wild card for entering collapsing and fallen cities) and the Hazmat Suit (which allows you to start a turn in a city with a Faded without gaining a scar). 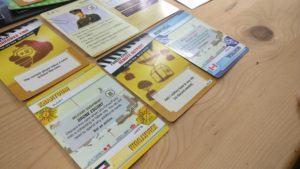 Look at all this lovely equipment! We were really digging this latest addition

The second epidemic came out, this time in San Francisco, which we could have done without. Pike immediately shifted their focus to managing this threat, and things were back under control. The black disease was cured soon after. 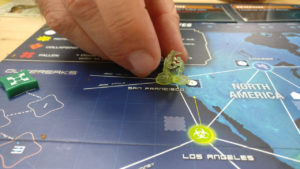 While there were a few Fadeds on the board, it felt like everything was fairly manageable at the moment. We had a slightly annoying moment where an epidemic came out for Istanbul, and there were only 2 black cubes on the board. If we’d eradicated it a little sooner, then the epidemic would have been a non-event. 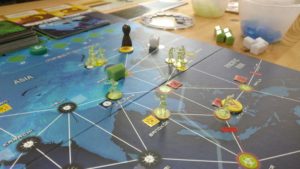 Not as bad as it looks

The same thing happened again, in Chennai. Annoying, but again, manageable. Eventually we managed to eradicate black, and having also built the requisite 6 military bases, our requirement for optional objectives was complete. Victory would now depend upon whether we could get useful city cards out of the hands of the Colonel and the Soldier, and into the hands of the other two players. The danger now was not one of outbreaks, but running out of cards in the player deck! Adding up the cards, we knew that we could afford one turn each. We took a few minutes to look at our options. It seemed hopeless, until we realised that with a bit of thought, this could possibly work. The Generalist was already in Miami with 4 yellow city cards, and even though the Colonel was currently in South-East Asia, their co-worker relationship meant that proximity was no object to getting the Miami card from the Colonel to the General. So yellow was sorted. Blue was also doable – the Quarantine Specialist already held 4, and the Soldier held the New York card. If the Soldier finished their turn in New York, the Quarantine Specialist could meet them there on their turn, take the card, find the cure, and the game would be ours! We played out our final turns with bated breath, until we realised at the final second that we’d miscalculated, and the Quarantine Specialist had run out of actions before they could actually find the cure! Shocked and dejected, we cursed our luck, until we realised that the “Induced Pluripotent Stem Cells” that I’d given to Ewan way back at the start of the game meant that Ewan didn’t actually need New York at all! We had won by a hair’s breadth! 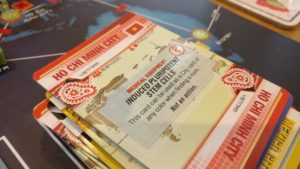 As our bonus for winning a game, we were given a new optional game-end upgrade that granted us the capability to add three equipment stickers to any city cards, if we so desired. We chose not to, and instead chose the following two upgrades:

We were buoyed up by our victory, but also aware that it was the narrowest of narrow victories, and unless July brings more good news, we’re going to be in trouble again.