You last heard from this project back in June, when I was steaming through it and expecting to finish it by half way through the year, at which point I would roll back to A and do it all again by Christmas. It has after all been a great deal of fun. Then life happened all over the place, and here we are in the middle of August, having finally reached Z. Just finding the notes for the dishes I have cooked since June is going to be quite the challenge; here goes…

J: Jordanian Mansaf
This was not one of the successes of the project, and the recipe did not make it into the ring binder. In theory, it is a layered dish starting with a flour tortilla, rice, lamb which has been boiled, and a yoghurty sauce with toasted nuts on top, all of which sounds good on paper. As you can see, it did not look so attractive off the page: 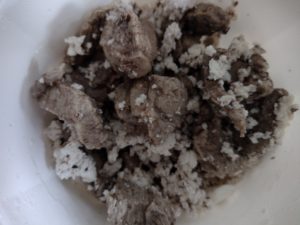 Pete was not terribly enamoured of it, mainly liking the bottom and top layers but nothing in the middle. Bernard thought it was okay. I thought it was a rigmarole to cook and an unpleasant dish to eat, and rather wish we’d opted for Japan instead.

V: Vietnamese Pho
I did not think I could go wrong making Pho, it being very close to food I would usually make, I read a lot of recipes and didn’t specifically follow any of them. Making pho is more about assembling delicious things, than actual cooking, right? So I had really good steak and thin noodles, a rich broth, and a bunch of nice toppings including coriander, mint, basil, beansprouts, lime, chillis and spring onions. Look how pretty it was: 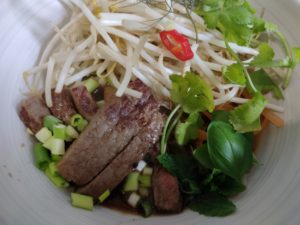 And yet this too was unsuccessful. Bernard did not like the beansprouts, and Pete plaintively claimed that “I tried to eat the noodles but they resisted being eaten.” Phoo to Pho.

K: Korean Bulgogi
I bought special Korean barbecue sauce for this, as required by the recipe, and forgot to use it. Still, it is good with burgers too. The marinaded beef strips pretty much wrecked my panini grill, and set the smoke alarm off constantly during cooking, so not the greatest experience for the cook. However the diners seemed quite pleased for once, reporting, “I would eat that again.” Not sure I’d go to the effort of cooking it again, mind you. 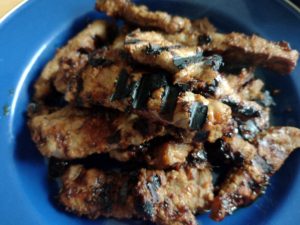 W: Glamorgan Sausages
There is a general attempt, on this project, to use countries recognised by the UN, and I acknowledge that Wales is not on that exalted list. But I ask you, what choice did I have? I put off making this one for a couple of weeks, while I attempted to source some Caerphilly cheese. I failed in this mission, and in the end used Lancashire and a small amount of mild Cheddar, which I hope is okay with you. It was certainly endorsed by The Guardian. 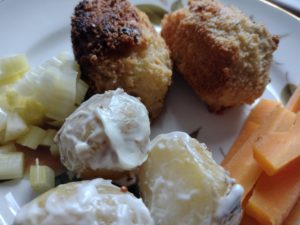 These little breaded and fried cheeseballs were surprisingly easy and pleasing to make, and I’m a huge fan of anything made of cheese. Bernard did point out that they were not really a sausage, and both he and Pete seemed disappointed by the lack of meat. Other than the mis-selling of them as sausages, though, this meal was deemed satisfactory, as much for the potato salad as anything else. 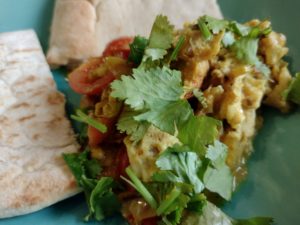 I’m pretty sure I’ve made shakshouka before, however this dish did not seem familiar except that it was basically a really tasty fancy scrambled eggs. It had a lovely delicate spice flavour and delightful texture, but I overestimated the recipe and there wasn’t enough of it. Even Bernard, who arrived very late to the table and ate it cold, enjoyed it.

X: Artsakhian Kinghal
Obviously X was always going to be a challenge, there not being any countries at all on the UN list beginning with X, and so it was agreed that we would choose from a small list of unrecognised nation states. I opted to cook something from the Republic of Artsakh, which is a region integrated with Armenia. Even then, the dish largely referred to as its national dish is more closely associated with Azerbaijan, so this one is a bit of a stretch. 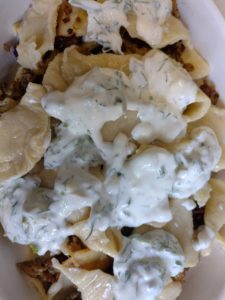 This is another dish featuring lamb, yoghurt, dill, and a carby base, this time home-made pasta diamonds. I have never made pasta and don’t have any appropriate equipment for the job, so I was quite pleased that they were recognisable pasta shapes. This dish did involve doing a lot of things at the same time, which you know by now I never really want to do; and cooking the pasta in batches meant that much of it was quite cold by the time it was served. Pete described it as “like a lasagne but without the things that make a lasagne great,” and yet he had three helpings of it. Bernard said he didn’t like it while he was eating it, but the aftertaste was quite nice. I promised to make a proper lasagne when we get back from our holidays. So Kinghal was an interesting curiosity that isn’t likely to make it into the general rotation, and by this time I’m revising the idea that I might do the whole alphabet again, given the waning success rate of the dishes.

Z: Zimbabwean Chicken Stew with Nhopi
This chicken stew was the grand finale of the project, and had to wait until after a week’s holiday AND an unexpected two weeks while I was up in Armpit driving mum around with her broken hand. The stew itself was nothing special: chicken on the bone cooked in a tomato-based sauce. However I made a side-dish of nhopi, and we loved the nhopi. Nhopi is butternut squash mashed with peanut butter, and we scraped that bowl clean, which is quite something considering we’re generally not massive fans of butternut squash around here. 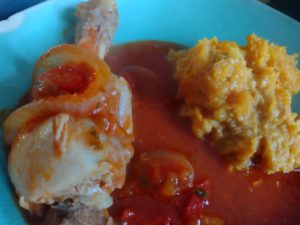 We say yes to nhopi.

And so this project, which has taken us all over the world to discover everything from sweet eggy noodles to an amazing pork vindalho, is over. We’ve already gone back to some of the dishes, the Ethiopian lentil stew in particular; and when the Doctor Pockless has picked a different dish or a different country, we’ve often made that as well (the Ossettian pies in particular spring to mind, those were bloody lovely). It remains for me to thank Dr P for not minding me piggybacking on his project, and of course my long-suffering but well-fed diners Pete and Bernard. Jo etvagyat!