No New Years Resolution this time, but I do squeeze this lovely little report into the end of January:

By grabbing the cat’s tail and tickling Karen’s ear with it, I can attain new levels of efficiency by annoying both of them simultaneously.29 January 2013

In February there was a big kerfuffle in the news about the meat in supermarket ready meals not being quite as advertised:

What percentage of my pork pie do you think is horse?15 February 2013
Burrito cat #burrito #cat #burritocat. 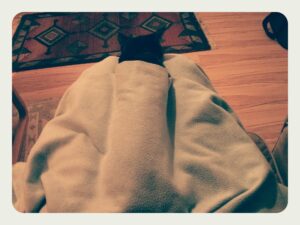 One of my favourite photos of Maisy. Look at me having fun with filters too. And the whole supermarket meat thing is still going on in March.

Going for fish and chips shortly. Wondering about the likelihood of my haddock being 70% seahorse.2 March 2013

That’s a half-decent pun, nice one me. Still on a food theme:

Little known musical fact: Phil Collins’ “No Jacket Required” is actually a concept album about mashed potato.3 March 2013
How dare Google cancel something that I actually use!14 March 2013

Based on the date, I assume that this is with reference to Google Reader. The internet was never the same again.

400,000 species of beetle, yet coincidentally they all have one thing in common: a metal pin through their backs.17 March 2013

This joke almost seems too good to have been original. Did I steal this from someone?

More “shit”s and “bastard”s in Back To The Future than I remembered. Wonder if the 6yo has heard these words before.17 March 2013

Ah the perils of parenting, and the uncertainty of that PG certificate.

I’ve finished my bottle of Glenmorangie. There is now a space on the shelf #scotch #timeToGoShopping27 March 2013

This was in the midst of my “single malt scotch” phase, which would eventually be replaced by my “acid reflux” phase and my “heart arrhythmia” phase.

I did not know, when I woke up this morning, that I’d be seeing a synchrotron today. Bet you’re all jealous now.6 April 2013

Ah this was a cool day – out of the blue Gammidgy contacted me and said he was going to Diamond Light Source for a tour that afternoon and asked if I wanted to come along.

Ah, politicians. Snipe and bitch and belittle and complain while your opponent is alive, mandatory day of love once they die.10 April 2013

I just reserved my mammoth. Hands off. It’s my fucking mammoth. Get away from it you bastard.12 April 2013

Mammoth was the social network that, briefly, was going to replace Twitter.

Legoland is shit today. Exhibit one: the Enchanted Forest has been pruned. 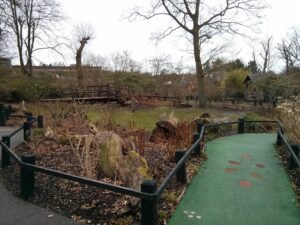 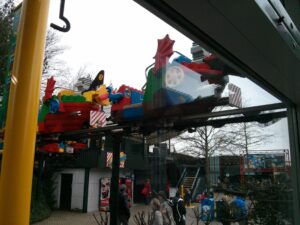 Small boy: “Hills. Hills are always sick. You have to get away from hills.”

Back when I referred to my offspring as Small Boy, we had annual passes to Legoland and spent a lot of time there, generally traipsing round the same few attractions every time.

I’m bored, anyone want to come over to play Pin The Rucksack On The Ocelot? You’ll have to bring your PTROTO set though, I’ve lost mine.24 April 2013

Hey, remember that mammoth thing that everyone was creaming themselves over two weeks ago? What happened with that?1 May 2013

Didn’t last long, did it?

I feel like at this point I’m starting to become self-aware of how often I tweet this.

When the cat buries her nose in my armpit and takes lots of sharp breaths, I’m never quite sure what to make of it.26 May 2013

Yeah you do. She’s just a weirdo.

I can confirm that this was not me “doing a bit”. It was fine once it dried out a bit more.
During the middle of this year there were numerous tweets about the station refurbishment in town. One of my concerns was about ticket barriers – the old station had never had ticket barriers, and the new main building definitely would. However, there was little communication about what would happen to the secondary entrance. Would they install ticket barriers there too? Or would they close it off entirely? Since that was the entrance I used, I was understandably concerned.

The first aid kit in our office is so old and rarely used that I think there might be leeches and a trepanning drill down there somewhere.5 July 2013

I then went out drinking, and on this occasion was being a pretentious drunk:

One of my favourite things about 2am is that feeling of having the streets to yourself. Depending on where you live, I suppose.6 July 2013
And the sound of bass escaping a late night pub, people drinking in the hope of finding something, or losing something.6 July 2013
A part of me wants to go closer, to engage, but I know that the reality of it will be not as poetic as I want it to be.6 July 2013

Give it a rest, will you? Arsehole.

I have more clothes than I need. At no time is this more apparent than when trying to choose what jumper to put on.11 October 2013

Since then, things have gotten worse, not better.

Sometimes I find myself mesmerised by the smell of my own armpits.23 October 2013

Well at least now we know where the cat gets it from.

As predicted, yes I did get bald spots. I’ve stopped doing it now though.

…my son will have sushi and Yorkshire pudding, please. http://t.co/w3zTJPhfwQ #OhGodWhatIsHeEating 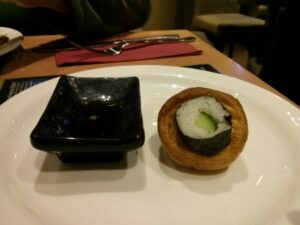 Back in simpler times, when a Pan-Asian buffet restaurant didn’t seem like the most unhygienic thing in the world.

The cash machine was dispensing only fivers. This seems like a really big deal to me, worthy of tweeting.29 October 2013

Back when we used to go to restaurants, I really liked having a decent stockpile of £5 notes in my wallet to leave as tips.

In an attempt to stop my absent-minded beard-plucking problem, I have purchased a small comb for £3.60.7 November 2013
Now I’m obsessively combing my beard. Not sure if I’d call this an improvement.7 November 2013

As you can see, the whole beard-plucking thing was a big deal for me at the time.

My favourite bit of @erzsebel‘s exercise regime is the naked stretches afterwards. Oops, was I not supposed to mention that? How indiscreet.9 November 2013

I didn’t ask her permission before including that tweet in this article, because she might have said no.

I have been forced to deal with the bald patches (brought on by my terrible beard-plucking habit) by going Full Gordon Freeman.21 November 2013

I’m still going on about the beard thing.

Maisy is enthralled by nature documentaries. She also likes The Good Wife. 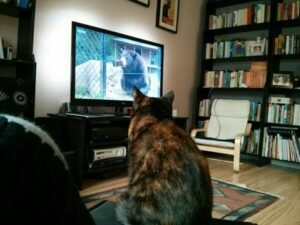 Stretching the boundaries of poetry again, I see.

I’ve figured out why I have communication issues with my cat. She’s Danish. Problem solved.7 December 2013

But how do you know that she’s Danish? Don’t leave us ha…

How do I know, I hear you ask. She doesn’t watch the subtitles when Borgen is on. QED.7 December 2013

Ahhhhh yeah that adds up.

He sees when you are sleeping. He knows when you’re awake. He’s implementing filters on your internet connection. Wake up, sheeple!24 December 2013

We’re nearly at the end of the year. What nugget of wisdom will I finish the year on?

My stubborn splinter, after 24 hours, seems to have either popped out by itself, or has gone underground and is making for my aorta.31 December 2013

And then five years later I started experiencing afibrillations. Coincidence? Who knows.