We get off to a classy start:

My resolution for 2012 is to spend more time with my face buried in Karen’s cleavage.1 January 2012

Roundabouts on A46 y’day, sun low in the sky, white lines invisible. Singing to @erzsebel “I have no idea what I’m doing!” She loved that.3 January 2012
I hate hate hate having to gibberishify a story so it fits into 140 characters. Maybe I should go back to blogging.3 January 2012
I nearly deleted my Facebook account yesterday, but then got worried that it might seek retribution, and lost my nerve.10 January 2012

You’ll be pleased to know that I did eventually gather my fortitude and delete my Facebook account. 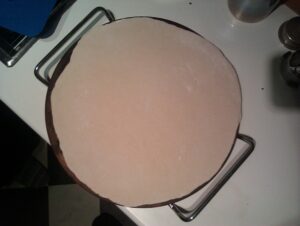 That sure is one super-round pizza base, perfectly proportioned to the stone. Well done, me. Well done.

I’ve finally decided that it’s time to retire the jeans that randomly unzip themselves. It’s mindboggling that it took me this long.27 January 2012
Once it happened at an audition. Most recently, in the presence of my kid’s headteacher. Liability Jeans.27 January 2012

The audition in question was in early 2010. I continued wearing the liability jeans for two years. Two years!

Of these, the only one that I actually tried was GTA5, and that wasn’t until 2019. At the time that I wrote this tweet, I still had a working XBox 360. It died a few months later, and then in early 2014 I got back into PC gaming in a big way.

These little valentine’s day tweets are cute, aren’t they?

Guys, guys, guys. I’ve got an unopened box of treasury tags. We’ve just *got* to think of something awesome to do with them.9 March 2012

You may have noticed that some of my favourite tweets are the ones that I look back on and just think “…wait, what?”

I just mistook a coworker’s head for a cat. Fortunately, I realised my mistake very quickly, so no-one will ever know.17 April 2012

One of the fantastic things about the 140 character limit is all of the questions that are left unanswered. Like, at the point at which I was still under the delusion that my co-worker’s head was a cat, did I… attempt to stroke it? Try to feed it fish? Open the back door for it? We’ll never know!

Just explained copying and pasting to my dad for the 852nd time.21 April 2012

For the sake of my reputation, please promise you’ll never retweet anything of mine that contains spwllung mistkaes.11 May 2012

No-one liked or retweeted this.

Hey, dya know what I miss about my childhood? Buying blank tapes.13 May 2012

Another bit of nostalgia-bait that failed to elicit any likes or retweets.

It’s a universally accepted truth that one of the best ways to start your day is with a collection of small piles of cat vomit.16 May 2012

Oh but THIS gets a like? Fine, I see how it is.

It’s a long time since you’ve looked at your nipples. Properly looked at them. A good, long stare. You should do that sometime.17 May 2012

I assert that the most ticklish place in the universe is the roof of my mouth.18 June 2012

Have you tried it? Tip of your tongue, get stuck in there. It’s electric for me, how is it for you?

If the person that I just sneezed on is out there, I’m sorry about that.26 June 2012
I would have apologised in person, but you ran away very quickly.26 June 2012

Ah now this I remember. I was on the train home, and I felt a big sneeze coming, so I covered my mouth to redirect it away from the person sat next to me. Unfortunately, it was a crowded train, so it just ended up being redirected onto another person. She made a horrified face, stood up, and dashed off, and I don’t blame her one little bit. This was 7 years before covid, but even then, it was disgusting.

If you want to know more about my history of mobile phones, I have written the following articles:

Apparently, I very briefly became one of those intolerable arseholes who tweets the minutiae of their morning routine. Thankfully it didn’t last.

Imagine looking in the mirror, opening your mouth, and a daddy long-legs slowly walking out.

I guess I just had a horrific thought out of nowhere and then wanted to make sure I wasn’t the only person suffering.

No-one liked or retweeted this.

Watching Firefly for the first time. I wasn’t expecting it to be so much like Cowboy Bebop.24 September 2012

If this reads like praise, that’s because it is.

My son is sat on the toilet singing “Happy Birthday”. Periodically the singing pauses, there’s some grunting, and singing resumes.20 October 2012

Karen said I shouldn’t post this one, but I beg to differ. Later on the same day:

It’s one of those thoughts that I’ve always found it hard to shake. Like how vestige should really rhyme with prestige.

Just taught copy and paste to my dad. About eight times now.11 November 2012

3/3 …had to change my trousers right there in front of all the bishops! Top that story, if you can!30 November 2012

Once upon a time, people only used Twitter for short, 140 character messages. Then some atrocious excuse for a human invented the “thread”. We all know where that ended up. This was one of my early, dirty, protests, and I think history proved me to be in the right.

I was clearly drunk on the train on the way home on 2 December, because I posted this sequence:

Just got told off for having my shoes on the seats. Yeah, I’m the bad boy. THE BADDEST BOY.2 December 2012
For my next trick, I’m gonna… actually, I have no idea. What do the kids do these days when they want to antagonise train attendants?2 December 2012
Anyone here from Weybridge? no? Nvm.2 December 2012
Good evening Weybridge. How are you all doing. That’s great, that’s great.2 December 2012

And the last noteworthy tweet of the year was: