Normally at Casa Uborka, the treat of a homemade pizza is reserved for the two of us, after Bernard is in bed. We take pleasure in working together in the kitchen, perhaps with a beer, making food for each other. This weekend, to put the topping on National Pizza Week, and because Pete’s mum is staying, we decided to make family pizzas. The one downside is that we only have one pizza stone, but we made the second one on a metal baking tray and it was acceptable. 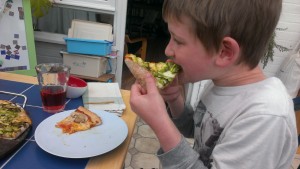 Tonight’s two pizzas were the classic Pizza Uborka, and the shaved asparagus pizza recommended earlier in the week by krissa. 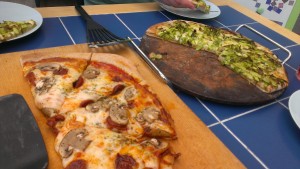 The Uborka (chorizo and mushroom) was modified slightly, with a passata and pepper sauce rather than cooked tomato, onion and garlic. We felt that this gave a more traditional but less intense flavour. The asparagus was cooked on the stone and had a satisfyingly crunchy base, with added texture because this week’s pizza and bread-making has seen us run out of white flour, so I had to substitute about 20% of the base with wholemeal flour. That was actually delicious and I might well do it again. 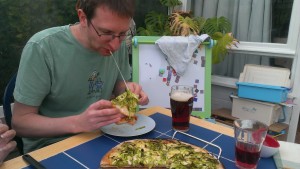 We thought we might have a bread week soon; would anyone be up for that?