About two years ago we redecorated our living room. Many changes were made, one of which was the decision to no longer have shelves for storing CDs on. We very rarely listened to them, as they had all already been ripped to the computer, so we put them all in a crate in the garage.

Last weekend we cleared out the garage. We happened upon the crate of CDs, and thought “hey, we should do something with these. Let’s buy some shelves for the living room.” It all makes perfect sense, doesn’t it? 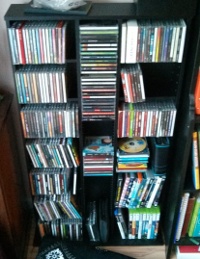 On Tuesday evening the shelves arrived, I assembled them, and as I started to load it up, I realised that I didn’t have anywhere near as many CDs as I thought I did. Maybe once upon a time I did, but I guess that over the years they’ve found their way to charity shops and such like. I’ve still got more now than I had 10 years ago. Anyway, call it nostalgia or call it something else, but that hard drive full of MP3s just ain’t doing it for me any more.

As you can see, even after adjusting the shelf spacing to allow for a bit of DVD storage (yeah, we’ve got a box of those in the garage too, so this whole saga is far from over), there’s still a lot of space left over. So these are my options:

1. Pack those CDs in tighter, free up another shelf or two for DVDs, and bring in some of the stuff from the garage, or
2. Buy lots of CDs, pronto.

What would *you* do, dear reader?