After the somewhat lacklustre start, this album presents a far meatier listening experience. It opens with one of Bowie’s best-known songs of all time, Space Oddity. The first album didn’t really offer any convincing clues about the greatness that Bowie would be destined for, but in just one song a whole new precedent is set. 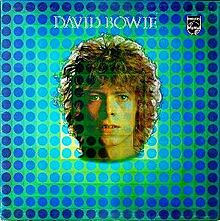 Unwashed and Somewhat Slightly Dazed is an energetic rock-bluesy song that nicely addresses my criticism of the first album that Bowie had none of his trademark sexiness. If I were being picky, I’d say that the harmonica vamp at the end of this song does go on for quite a long time longer than it strictly needs to, but I guess that this is just an example of the style at the time. The thing about long songs is that if the listener is really into it, then it’s fantastic and epic, but if they’re not, then they find themselves wishing the song to end so that they can listen to something different.

I’m less taken by songs like Letter to Hermione and God Knows I’m Good. They would have fit in quite well on the first album in that, while they’re lyrically okay, they’re musically a bit twee.

Cygnet Committee is a most remarkable song. It’s the longest song on the album, and suffers somewhat from the factors I was mentioning before. On first listen, I wasn’t really prepared for it, and didn’t “get it” at all. I was greatly enjoying the sound for the first five minutes, but started to tire of it after that. However, on subsequent listens, when you (a) know that it’s going to be nearly ten minutes long, and (b) have a handle on the weighty lyrical themes, it’s far more rewarding.

I can’t take Janine seriously at all though, because it sounds like Bowie is trying to do an impression of Elvis Presley. I can almost hear the lip curling. There’s some very quirky percussion in it – contrasted with the previous album, these are odd little additions that give the song a little texture without wrecking it completely.

An Occasional Dream mostly fits into the list of songs that don’t belong on this album, but I have to admit that it has been sticking in my head a bit over the last two weeks. It’s got some chord changes in it that really hit the spot. But then there’s some fucking flute solos and flute is not a Bowie instrument. Ever. Forbidden.

I’ve been always looking forward to hearing Wild Eyed Boy From Freecloud because I think it sounds like a cross between Rufus Wainwright and Joanna Newsom. I’m sure that the novelty wouldn’t last forever, but it hasn’t worn off yet. And it’s got flute in it, and I’m a total hypocrite. Yay me!

The album closes with Memory of a Free Festival which is a song that I could really like if it were half as long, but as it is, I don’t quite love it enough to outweigh my intrinsic lack of patience. The second half is just an extended repetition of the line “The sun machine is coming down and we’re gonna have a party, uh-huh-huh” which is a very evocative line, but after listening to it for four minutes you start to feel faintly ridiculous. But then Hey Jude finishes in a similar way, so if it’s good enough for The Beatles then it’s good enough for D.B.

Hits from this album: Why, Space Oddity, of course.

My favourite song from this album: I’ll always love Space Oddity, but I also found myself hooked by Cygnet Committee and would probably come back to it again on occasions.

Next up: The Man Who Sold The World.