This week’s episode was all about sweet dough, and some interesting tea loaves were produced. In the BakeAlong we have only one tea loaf (although I might make one later today). So that means Asta is star baker again, with this little beauty: 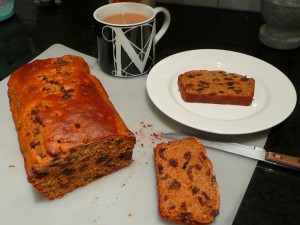 Tea Loaf is totally foreign in North America so I had to do a search- and just to be on the safe side I used Google UK– The majority of what came up seemed pretty straight forward– it’s a tea loaf because it has raisins and currants soaked in tea and it’s baked in a loaf shape. OKAY.. I grabbed a recipe that looked not totally boring, tweaked it by adding some lavender and seville marmalade  and baked.  It’s actually quite tasty.  Nowhere was the word yeast bread mentioned…
What I have made is closer to a bara brith– didn’t know about that one either. I had decided that everything I bake during the run of the show would have to be something I hadn’t made before, so at least I got that part right.

Meanwhile Lisa did her own thing, and made Viennese Tartlets, using Delia’s recipe: 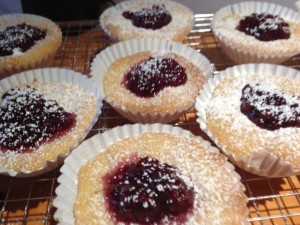 Mine came from Delia’s CAKES book. Exactly the same except in the olden days she said to pipe through a big rosette nozzle into a round – and the mixture would not pipe, it was far too solid. I dolloped teaspoonfuls into bun cases then sort of smoothed them out with wet hands and made a thumbprint in the middle. The indentation could have been bigger because the jam ended up dolloped on top. They do not look very beautiful (just call me Ruby, with my false modesty) but they taste good.

And, in a moment of superbness which would have won her the title had it been cake week, a Caramel Ombre: 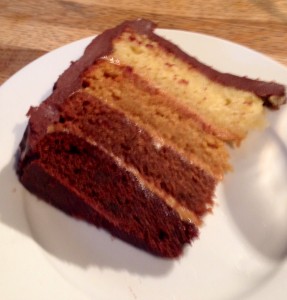 Followed almost exactly except I was a bit short of ground almonds. Thought it (esp choc layer) was going to be a disaster because they collapsed as I took them out of the oven but with hindsight I guess that is a result of it containing yogurt and almonds: it was never going to be a light-as-air sponge. Delicious, went down really well with a mixed group of about 20 (aged 2-82) and really recommend it. I assembled it upside down because I thought it should be pale at the top.

I also went off-list and produced a courgette, cardamom and lime cake which has been universally hated within the house; and a middle-eastern flatbread called Maneesh, which everyone seemed to like. Especially dipped in tomato soup. 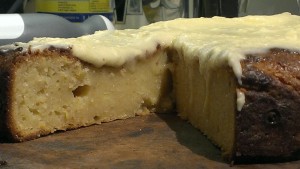 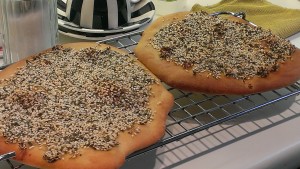 Tonight, it is the pastry round. Let’s bake!
EDIT: After writing this post yesterday, I did go off and make a tea loaf; after much research and not having found a recipe I liked, I made one up. I’ll post it for you later in the week.