(Follows on from Part One and Part Two and Part Three)

The situation has changed slightly since my previous review post. Until recently, I was replacing the majority of my beer consumption at home with alcohol-free alternatives, but still generally drinking regular beer when out on the town. But this is no longer the case, and it turns things on its head. No longer am I scouring the shelves of supermarkets, comparing the range on offer in Tesco compared to Morrisons etc, but I am now at the mercy of pub landlords and what they choose to carry. The rules of the game have changed.

Thanks to a busy week of socialising, I have a few things to report. Sadly it didn’t occur to me to take photos of these beers at the time. Probably not a huge loss, as a photo of a green bottle doesn’t really tell you much, and the lighting in pubs is generally poor. But let’s begin.

I was in The Golden Fleece (London EC4N 1SP) with my sister and a friend of hers on Wednesday evening and this was the only alcohol-free beer in their fridge. It’s been a while since I’ve had Heineken, but I recall that it was one of my preferred lagers back when I used to drink lager sometimes in my late teens and early twenties. This stuff didn’t taste too bad at all, and I’ll be honest that by the end of the evening I had forgotten that I was even drinking alcohol-free beer at all. We were scrolling through the dating app on my sister’s phone, helping her to filter out the weirdos, give a second look to some chaps who were maybe not classically good looking but seemed to have other redeeming qualities, and compose the perfect introductory message to a very tasty-looking chap called Mark. To all those who think that they need alcohol to have a good time, I say piffle!

The following night I was in the Greyfriar in Reading, meeting up with a friend who I haven’t seen in a year but was in the area. I recommended this pub because it’s near the station and carries a great selection of interesting beers, however sadly it does not seem to extend that same service to those who don’t want alcohol. Again, just the one alcohol-free beer, and it’s Budvar. Now, Budvar is another of those lagers that I was quite keen on back in my late teens. One thing you should be aware of, if you’re not already, is that Budweiser Budvar and Budweiser have very little in common. The former is a Czech brewery, the latter American. The Czech one is the original, and best. Sadly, I was disappointed by the alcohol-free version. It’s an awful long time since I’ve had a Budvar, so it’s hard to know whether my tastes have changed or if the alcohol-free one simply doesn’t match up to the original. After a couple of these, I was strongly considering going to The Nag’s Head or The Castle Tap, both of which are within a 10 minute walk and reportedly have a much better selection of alcohol-free beers. However, my friend had a train to catch in about half an hour, so it made more sense to stay put and have one more. Next time, I think I’ll bypass the Greyfriar and go straight to one of those instead. 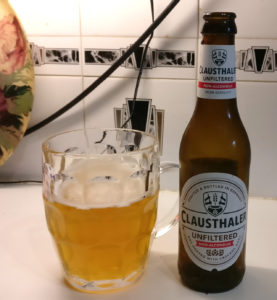 Back home on Saturday evening, I cracked open a bottle of this lager that I had had in the fridge since I found in the supermarket the other week. And it’s very nice stuff – similar to the Free Damm that I sampled in the last batch, this has got a pleasant sweetness to it, though whereas the Free Damm has a “delicate honeyed florality” as I described it at the time, this one has more of a citrusy tang to it. Very refreshing, and another really great showing by Team Lager. In a cage match between it and the Free Damm, I’d probably give the latter the victory, if only because it comes in cans so they occupy less space on the shelf and in the fridge.

This week’s socalising bonanza comes to a close with Father’s Day lunch at Tang in Bracknell. Again, only one alcohol-free beer behind the counter here, and it’s Beck’s Blue. Now I’ve never been a fan of Beck’s, so this one is like the biggest challenge of all. Of all the alcohol-free beers in the supermarket, this is the one that I’ve avoided purchasing most of all, but now that I’m drinking alcohol-free beers in pubs, it was only a matter of time until I found myself in this situation.

How did it go? Not bad, actually. Only had the one, and to be honest, I would take it over the Budvar. Maybe it’s because my expectations were very low, who knows. But on the whole, I don’t think it deserves the prejudice that I’ve shown against it, and if we were ranking all these alcohol-free beers (now up to 15!), there’d be definitely at least 3, and maybe even 5, beers that I’d put below it.

It’s been a very lagery sort of week, hasn’t it?