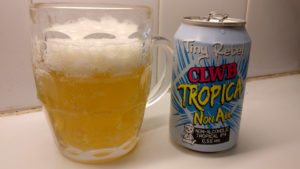 But don’t worry, you can suntan.

This had a really promising fruity tropical smell but had a pecularity in the flavour that, try as I might, I can’t quite put into words. Not very helpful, I know, but for once I’m stumped. Still, I did find that I got used to the weird flavour by the end of the drink, so it wasn’t a deal-breaker by any means. I’d be interested to sample the alcoholic variant to see if the same quality is present in that one too. 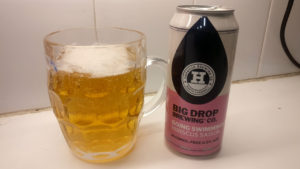 Good grief this is vile stuff. Imagine that you had a glass of really bold, punchy, tangy hibiscus flavoured drink. You finish your drink, and then it’s time for bed, and you want to take a glass of water up with you. But you’ve got no clean glasses, so you just re-use the same glass that you were drinking from before. In the night, you go for a swig of water, and can still detect the flavour of your delicious hibiscus drink, albeit at homeopathic levels. 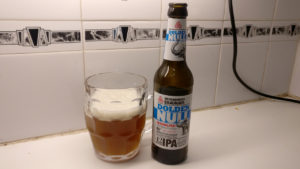 Karen added this to our Abel and Cole order. It’s not a bad IPA, to be fair, but it is a little on the sweet and malty side, so it’s not got what it takes to become one of my favourites. That said, it’s still very drinkable and I’d gladly have it again. 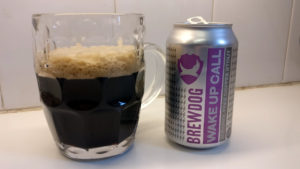 In response to “The Lockdown”, I placed a hefty order online at Wise Bartender. I’ve ordered large quantities of some of my favourites (Clausthaler, Infinite Session, A Ship Full of, Hazy AF) and some singles of some new ones (reviews will be forthcoming). I also took a punt on a 6 pack of this, which I’ve never tried before, but I was feeling a bit bold.

This is an espresso stout that contains a fairly hefty amount of coffee – I didn’t realise at the time but it’s actually got about 37mg of caffeine per can. Considering that I’ve also been off caffeine for a couple of years, I was worried that I might have pushed my luck a bit.

But it’s great stuff, and I encountered no negative reaction to the caffeine, so on the whole this is everything I hoped it would be, and I don’t regret buying 6 instead of just a solitary can. There’s an ever-so-slight whiff of tobacco, which is not a flavour that I enjoy in a drink, but it’s at bearable levels. 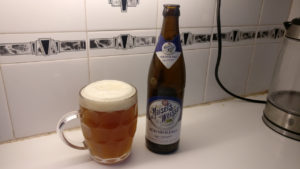 I generally feel quite optimistic when trying a new alcohol-free wheat beer, as the standard has been consistently high. This one makes an extra-special first impression as Maisel was one of the names by which we’d sometimes refer to the fantastic and recently-departed Maisy.

The drink itself has a deliciously clean orangey flavour and is utterly divine. It’s hazy with a succulent and creamy mouthfeel, and has a head that lingers without being ridiculously overblown to start with. This beer is so good that it’s got me wondering if I need to add a “3 pint” option to my rating system.

There are more new beers waiting in the garage, so if you’ll excuse me, it’s time I went and started work on the next collection of reviews.