I’ve had three new alcohol-free beers awaiting review for a while, but I’m glad I waited until today to write this review rather than doing it yesterday, as I’ve snaffled a fourth! In order:

A Ship Full Of IPA 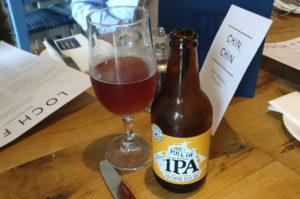 This is the alcohol-free beer carried by my local Loch Fyne restaurant. I’ve had reason to end up in said establishment on a couple of occasions recently, and on both occasions have treated myself to one of these with lunch. It’s absolutely delicious stuff, and easily up there with some of my favourite alcohol-free IPAs. 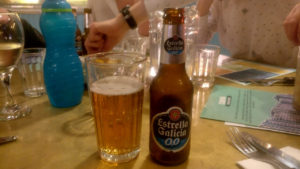 This was the alcohol-free option available at Cabana at the O2. I went there to see Two Door Cinema Club, who were fucking ace, by the way. Unfortunately, it was such a good night that I have forgotten what this beer tasted like, and I didn’t take any notes. All I can remember is that it was a lager, and it was good enough that I ordered a second.

Inside the O2, the only alcohol-free beer I could find was Budweiser Prohibition, which, as I’ve mentioned before, is basically watery piss. It was so bad that I found myself tempted to get myself a pint of proper beer, a temptation which I succumbed to, and then later regretted. 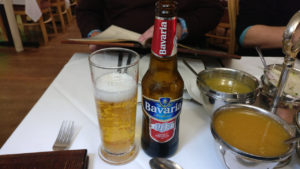 I had this one in a (looks at photo) Indian restaurant… somewhere… we definitely had poppadums, and there were some people sat opposite me.

Don’t worry, this review isn’t going to be as light on facts as the previous one. I did have my notebook with me, and from what notes I made, I can convey to you that this one was very similar to the San Miguel. It had a fair heft of that worty flavour, enough that it would have been off-putting when I first started drinking alcohol-free beer, but by now I’m getting quite used to that, and can tolerate it in small quantities. 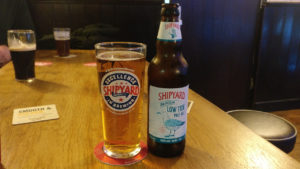 And this was my latest discovery, last night in a Brakspear pub in town. Initial sentiments were fairly positive, though I did detect a tiny bit of cabbaginess in the aroma, reminiscent of the Nirvana Sutra. But as the evening progressed, I also noticed other off-scents. I have conjured up the words to describe these smells, and it gives me conflicted feelings – on the one hand, I have delight that I am able to describe it with such accuracy. On the other hand, the description itself makes me want to hurl. Here it comes.

You know at the end of the day, when you take off your trainers, and sometimes you think “hey, as a test of nerve, I’m going to stick my nose in there and take a real good huff?”

This beer isn’t too bad as long as you remember to hold your breath before you lift the glass to your face.