The naming of these blog posts is starting to get very awkward. As you can probably tell, when I started this series, I did not expect it to run to seventeen instalments (and counting). I probably didn’t think that it would be running for two years either – I expect that, at the time, I thought that I’d be back on the alcohol-containing beers by now. Certainly I’m finding this ever-growing archive to be a little lacking in searchability by dint of all the reviews being gathered into arbitrary bundles with largely-meaningless titles. Ah well, too late to fix it now.

In this instalment, I’m going through all the beers that were in the AFBeerClub December box (with the exception of those which I’ve already reviewed). There were eight in the box, and the six that we’ll be trying for the first time are these: 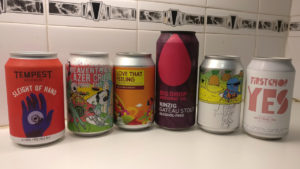 To make things easy on you, I will reorder my reviews so that they match the sequence of the drinks in the photo above. See, I can be helpful and systematic sometimes! 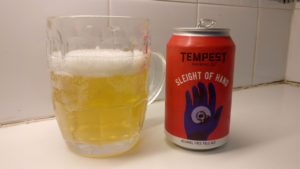 On pouring, I observed that this beer is very pale and clear with a robust head that was retained throughout drinking. Drawing the glass to my nose, it has a very clean and fresh aroma, with some hops popping up to say “hello”. The flavour is very intense and sour, packing a huge punch, but it’s quite a dignified sourness, not an out-of-control vinegariness. I admit that sour beers are not usually my thing, and this probably isn’t going to change my mind, but I can definitely see the appeal, and I think that if you are someone who likes a sour beer then I think that you’d find this one to be very well-crafted indeed. 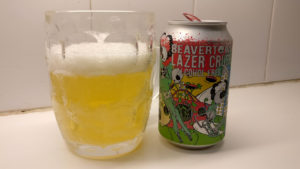 Another pale beer with a good head. This one has a sweet, floral aroma, which made my mouth water. Unfortunately the flavour didn’t quite live up to the promise, but that’s not to say that it’s terrible. It has a vaguely sour flavour which tastes a bit like vomit, but in a pleasant way, like parmesan cheese, and not in an unpleasant way, like vomit. In the pantheon of quotes which I thought I’d never say, I never thought that one of them would be “I could gladly drink this beer, which tastes not unpleasantly like vomit, all evening.” What a strange review, Pete. Do you think you’ve been doing this for too long? 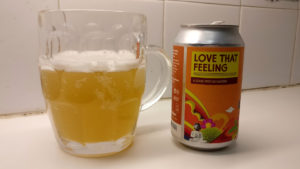 Oh looky, another fairly pale beer with a thick head. This one, however, is cloudy, not clear. The aroma of this drink is very bold, reminiscent of tropical fruits and maybe a bit of banana? My expectations for a flavour that took me to an abandoned desert island in the Pacific were then utterly subverted. It’s a very unconventional-tasting beer and I was unable to think of any words to describe it, which is surprising, given how low I normally set the bar for what constitutes a beer review. I’ve somehow managed to disappoint myself, despite my expectations of myself already being rock-bottom. I could only come to the conclusion that I would not buy this beer again simply because I can’t think of what mood I would have to be in to want it. I do observe that it’s a fairly refreshing drink, but then there are other refreshing alcohol-free beer options out there, so it’s by no means got a monopoly on that category. It’s not awful, just very very weird, hence I declare it: 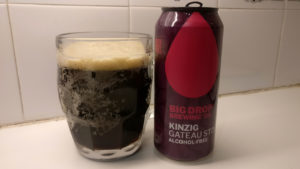 Despite it’s position in this review, this was actually the one that I saved until last, because it sounds absolutely awesome, doesn’t it? This one comes in a 440ml can, hence why the glass in the photo above is fuller than usual. The aroma of this one is exactly what you’d hope for, very sweet with the forest fruits coming through strong. There was a decent head upon pouring but it dissipated very quickly.

At this point I notice that I seem to have a tendency to set high expectations for a beer based on a hearty sniff, and then be disappointed when the flavour does not live up to it. You may have noticed this pattern too. And given how often Big Drop beers seem to let me down, you’d expect me to have tempered my enthusiasm for this one. But no, I’m an idiot, and I fall into the same traps over and over again.

The flavour is mostly there, to be fair. All the flavours you’d expect, but sadly just a bit watered down. I feel like if this were an alcoholic beer, it would be at about 6% and have the consistency of syrup, and it would punch you hard in the face with every mouthful and leave you feeling under an onslaught of flavour. But this one, while pleasant, is just a bit too compromised, and with every mouthful you are left thinking about what should have been. It does also have a bit of a metallic aftertaste.

In conclusion, spectacular smell, but if you’re planning on drinking it, then… 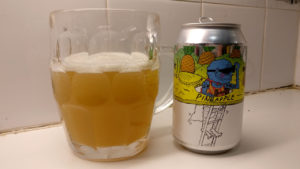 When I reviewed the regular “No Worries”, I wrote what might be the shortest review that I’ve ever written. It’s a spectacular drink, and in hindsight I feel like maybe it deserved more words. In fact, this review of the Pineapple variant is already longer, and I haven’t even got round to talking about the actual beer under review. So let’s fix that.

This beer, similar to the regular No Worries, is very cloudy with a good head and a nice creamy mouthfeel. There’s pineapple in the aroma, but it’s mellow, not harsh like a can of Lilt. Likewise in the flavour, the pineapple is pitched just right, where it complements the overall beerishness, without drowning it out completely (looking at you now, Mikkeller Racing Beer). I wouldn’t necessarily drink this as a session beer – after all, pineapple is the fruit that eats you back – but I’ll definitely consider it next time I’m ordering a batch of beers. 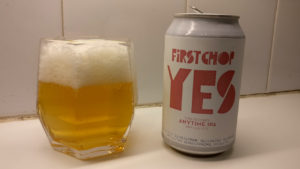 And so to the last beer of the group, and the one that I actually drank the first of the six. You can see that I’ve poured it in my awesome new hexagonal tumbler that I got from Aldi… or was it Lidl… which I was intending to use as my new beer-reviewing glass, a commitment which I then promptly forgot about when it came to the other five. So this photo will endure as the awkward and embarrassing outlier, a testament to my failure.

You’re probably waiting patiently for the bit where I actually talk about the beer, so I won’t make you wait any longer. Nice lingering head on this one, slightly cloudy to look through, and a smell that declares “I am an IPA and am not ashamed to admit it”. The flavour is tangy and hoppy with a slightly sour aftertaste, and it easily holds its own with beers like Infinite Session American Pale Ale and Brewdog Nanny State, therefore it warrants…

Six beers is too many for one blog post, and I anticipate that some months there will be no beers in the box that I haven’t had before, so eight beers will definitely be too many for one blog post. I made the mistake of taking that top photo up front, and mentally committed myself to rolling them all into one review. Going forward I’m going to stick to 3 or 4 beers per review, and do two posts per month.

Robin at AFBeerClub knows how to pick them. These are all very nice beers, with the possible exception of the Kinzig, which disappointed me, perhaps mainly because I let myself get carried away with my expectations.

I can’t help feeling that this is turning from something useful into something of a vanity project. Once upon a time, when I was reviewing AF beers that you might find in a pub or supermarket, I felt like there was value in the reviews, as they would help you to know which beers to try and which to avoid at all costs. But what am I doing now? I’m writing reviews for beers from breweries that you’ve never heard of, that you’d never find on a mainstream supermarket’s online shopping catalog (see how I shifted my language there? Stand back, wordsmith at work). These reviews are of no use whatsoever to someone who wants to add a few AF beers to their regular weekly shop. However, hopefully there are some adventurous people out there who, as a result of reading these reviews, have placed an order at a specialist supplier (I’m a fan of Wise Bartender myself) and discovered some real hidden gems. Or am I just hurling my amateurish reviews into a void?