Our first tour took us sporadically through some of the letters twixt A and L, with occasional photographs of the actual food, as the outstandingly elegant Dr Pockless and I took on the task of cooking through the alphabet. We pick up ostensibly halfway through the alphabet, and will in the next post be filling in some of those missing letters. As we dig in to these next few letters, it turns out that almost everywhere has a national dish that consists mainly of chicken and rice; this made me wonder about the feasibility of doing this project again, but only making chicken and rice dishes. 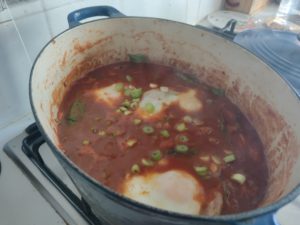 Ideally I’d have made this in a large fying pan; my options were a small frying pan, a larger buckled frying pan, a wok, or a casserole dish. I went for the casserole dish, which meant my sauce was deeper than perhaps it should have been. We used a Jamie Oliver recipe, and as you know Señor Oliver is known best for an inauthentic paella, so perhaps this was a terrible choice. Furthermore one doesn’t really need much of a recipe for this, it’s fried up peppers and onions with tomato and chorizo, and eggs on top cooked in the heat of the sauce. Personally I think peppers stewed slowly in passata is a heavenly thing, but Bernard ferociously disagrees, so it was toast and soup for him again, poor neglected wee scrap. 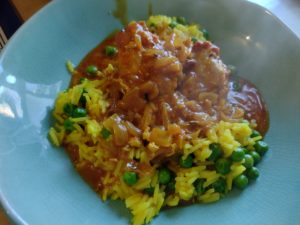 A few years ago while Bernard still did karate, Pete and I took the opportunity to continue our walk along the Basingstoke Canal. It was not such a nice day as this one, and we ended up dripping all over the floor of a Nepalese restaurant in Aldershot. What did we eat? Chicken and rice. So despite this recipe being from Sainsbury, I feel I can attest to it being somewhat like what I remembered from that wet wet day, but with fewer small bones. I added the peas because I was craving vegetables.

As I approached the O/P/Q quandary, it became clear that our options were narrowing. Both Oman and Qatar claimed a chicken and rice dish called Machboos; there wasn’t much else for Qatar, so for Oman I had to pick the only other dish that really seemed doable, with the bonus that it wasn’t chicken and rice, and featured an interesting dumpling. Dhokri is a Lawati lamb and dumpling stew, and the dumplings are little flour/salt dough things more like nokedli than gnocchi, in my opinion. I thought they were slightly underdone, but Bernard thought they were one of the best things he’s ever eaten. All this rich cookery adventure and his favourite thing is the dumplings. Typical.

Peruvian cuisine is heavily influenced by Peru’s Chinese population, and this is a version of fried rice not dissimilar to a dish I already cook reasonably often. However the egg was scrambled separately (I did this in the microwave), and the meat was chicken rather than bacon; and this is how I will be cooking fried rice from now on. There was a huge quantity of it, and the leftovers were extremely good as lunchtime burritos the next day.
Doctor Pockless eschewed the fried rice, in fact eschewed Peru altogether, and made a really nice Pakistani aubergine curry, which I tried for me and Pete a few days later. Bernard made himself some sushi that night.

Q: Qatari Machboos
It turns out that Dr P eschewed Peru for a good reason, which was that he intended to cheatingly use its indigenous name Quechua for ‘Q’ week. I stuck to the rules and made the Machboos, which is a bit of a generic Middle Eastern chicken and rice dish, but unquestionably delicious. There’s no photo; all that remained was just about enough for a very peppery burrito the next day. We’ll put pretty much anything in a burrito, in this house. 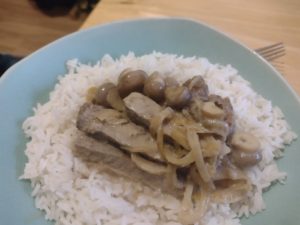 It was hard to choose a recipe for beef stroganoff, but happily The Guardian had done a good review of lots of recipes, and developed “the perfect” one. Controversially, this involves cooking the steak whole and then slicing it, which actually works well for me as I’d rather handle cooked meat than raw. I’m always happy to come back to the sharp and sour flavours of central/eastern europe. The meat and mushrooms were juicy, and there was a good amount of the delicious sauce. If you do cook this recipe, look out for the bit where you rest the raw seasoned steak for an hour before cooking, and spend 30 minutes on the onions.

I promised we would end up with meatballs, however I’m scheduling this post the week before ‘S’ so in fact we will start the next post in Sweden, as well as back-filling some of those missing letters. Bernard and I have researched an Angolan chicken and rice dish, and there will be some sort of curry from Bangladesh, if I can choose a recipe, which is currently challenging me. Suggestions gratefully received.