In the previous episodes, there was chicken, there was rice, there were meatballs. This update will include all of the above. We are going to go back and fill in some of the letters we missed, and plough on through S, T and U. The next few dishes were planned with a lot of input from Bernard, who has taken an interest in geographical cuisine, and this is to be encouraged. 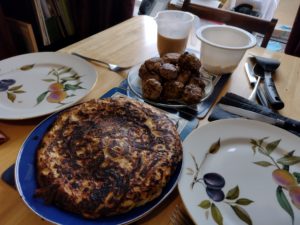 I recently acquired a spiralizer, the proper sort with feet, which sometimes makes amazing super-long noodles, and sometimes just burps out little crescents. For the potato pancakes, I started with a Swedish Raggmunk recipe, but couldn’t resist spiralizing the potatoes, which meant that it came out as a massive rosti, instead of neat little pancakes. A lot of internet recipes allow you to adjust the number of servings, which when cooking for a family of three often means ridiculous quantities such as 0.67 of an onion, and because they almost universally work in cups, I have to do a lot of guessing. So that’s by means of explaining why the batter for the potato pancakes was far too thin. I ended up pouring it all into the pan with the potatoes and hoping for the best, so when I turned the pancake, I poured uncooked batter all over the hob. Both the meatballs and the pancakes needed to be fried at the same time, and you can’t make the gravy until the meatballs are cooked because you use the meat juices. All of this was so complicated that I didn’t even think about some sort of vegetable element, and had to hurriedly open a tin of sweetcorn just to ease my own maternal guilt. Served with cranberry instead of lingonberry sauce, this meal was a massive faff to make and an even bigger faff to clean up afterwards, so although it turned out to be delicious and rather substantial, I didn’t enjoy making it and would in future just buy ready made swedish meatballs, which are after all widely available. 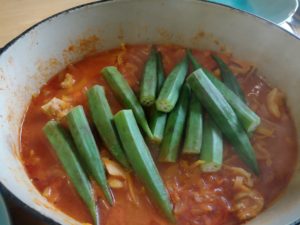 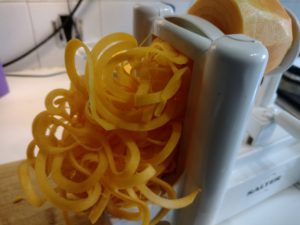 This is a chicken stew with butternut squash and okra. The spiralizer came out again, and made enormous butternut squash ribbons, which totally wasn’t what was intended by the recipe. The chicken is marinated with LOTS of garlic and paprika, and the okra is thrown in towards the end. See what I said about quantities above? This recipe called for 10.8 okra. I had 17 of them and no further use, so used them all. I then accidentally left it on the hob while I took Bernard to his piano lesson, but fortunately remembered in good time and called Pete to ask him to switch it off. This was a bulky and satisfying dish, with enough paprika to leave a burn on the tongue. Bernard was generally unimpressed by the okra, but otherwise it went down well. 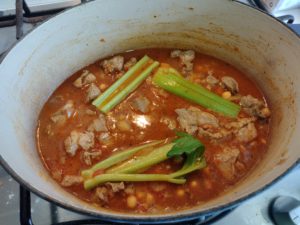 This recipe says it’s an Algerian dish, however my research brought it up for Tunisia and I’m imagining that there’s a big crossover there. It is lamb with bulghur, so not available to Dr Pockless over in Budapest, who can’t get lamb. It filled the house with good smells, and there was not enough left for a burrito. Bernard’s verdict was “I don’t like what you’ve done with the bulghur,” because he likes bulghur to be prepared in one specific way, and if you do that he will eat it by the tablespoon. Anyway I’d make this one again for sure. 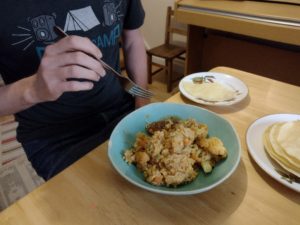 Fudging a little here, but this can be considered a dish from Bangladesh, so I’m comfortable with it being in the B box. I printed the recipe and then realised it was a recipe for a pressure cooker, which I do not have; and googling seemed to find me only more of the same, so I had to guess what would happen if I didn’t use a pressure cooker. This may explain why the veg were almost unpleasantly mushy and the whole thing lacked any kind of kick. Having set the recipe to 3 portions, this turned out enough to feed 10, and was definitely not an improvement on any of the dahl recipes I already make. We tried it in burritos the next day but this was also not successful. 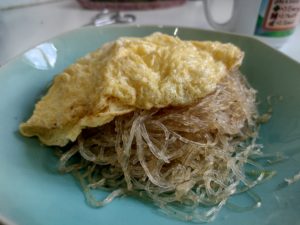 Bernard’s set of friends, acquired mainly via Discord, is cosmpopolitan, and includes one person from the UAE who suggested this recipe. This is far from the usual variation of meat+rice as you can get; it’s basically buttery sugary rice noodels with egg on top. It leaves you feeling like you just had a slightly sickly pudding, and with a craving for fresh fruit.

Bernard: The noodles taste odd, I’ve never tasted anything like these [After a few mouthfuls he went and made himself a pasta mugshot]
Pete: I would never want to eat this again. 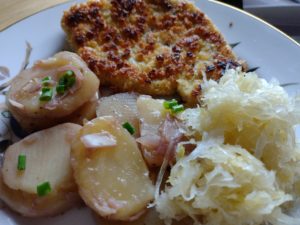 I really love sauerkraut, and even tried to make some earlier in the summer when I had a glut of cabbage, but for this recipe I broke into my stash of store-bought jars, which is the best way. The potato salad was quite a bit of faff to make, and breading and frying meat is not my usual style however this was such a good dinner and I would definitely come back to it. In the middle of bashing the pork chops with a rolling pin, the side effects of my second vaccination suddenly hit, my energy levels draining like a valve had been opened. I managed to stay upright to finish the cooking and the eating, but then had to go to bed, leaving the clearup to the boys. Between them Pete and Bernard gave this meal 4 thumbs up and one “sehr gut.” However there was a certain amount of Fawlty Towers going on throughout the meal, which is perhaps not to be encouraged.

In the next post, we should be able to finish off the alphabet, remembering that we still have J and K to go back to. Then we have to decide whether we’re going round again.