Welcome to 2017, and it’s clear that I’m in a retrospective mood.

I’ve been in one of those nostalgia mires all week. It’s starting to get a little wearing.5 January 2017
There’s a 90% chance of a cathartic nostalgia blog post tomorrow.5 January 2017

As promised, here it is.

He wants to pay prostitutes to piss on him? Good for him! That’s not the reason why he shouldn’t be President though.11 January 2017

As ever, my tweets stay fairly distant from current events, with the exception of the occasional oblique observation.

We’ve bought a new vacuum cleaner. We haven’t always had the best luck with vacuum cleaners. Maybe this one will be the awesome.17 January 2017

This one did not turn out to be the awesome. Vacuum cleaner nirvana will have to wait until November 2020.

My to-do list is full of things I’m probably never going to do. I should clear that out sometime (adds to to-do list).14 February 2017

You know how the saying goes: When the cat’s away, the mouse will drink White Russians and watch The Expanse. I think that’s how it goes.3 March 2017

5 likes! Five! That’s amazing! Also, yet another reference to the alcoholic drinks I’m drinking. It’s weird how much I’m noticing that now.

Right, buckle up, chums. There’s going to be a few of these, and I’m not leaving a single one out.

My livetweeting of Eurovision this year was also very thorough. I think that this might be because I had a laptop for the first time in my life (albeit my dad’s old one). If I’d been on my phone I would have lost interest far sooner, and probably the same is true for the tweets while watching The Room. As always, the Eurovision tweets don’t really make much sense out of context, but this one stands up by itself fairly nicely:

If the cat falls off the back of the sofa again, she’ll land on @erzsebel and it’ll be well funny.13 May 2017
There’s a tramp
In his pants
On the edge of the Thames
Washing himself
With Fairy liquid
While the swans watch
Can’t unsee.25 June 2017

Yep, I remember this from our Thames Path walk. The image is seared into my brain.

Another one of my desperate attempts for attention. Absolutely nothing.

Halloumi, Halloumi
The squeaky cheese
From its little square packet
You can slide it with ease7 July 2017

Hang on, what’s this? Two retweets and four likes? Have I finally hit upon The Formula For Popularity?

Feta, Feta
Not to sound gloomy
But you know what’s better?
A tasty halloumi.7 July 2017

One retweet and three likes. That’s still pretty good. I should do more of this cheese-themed poetry.

Yeah, they love the silly rhymes.

Software development tip: when you find yourself spending hours trying to track down an elusive bug, stop and eat a flapjack. They’re magic.1 August 2017

I don’t think there are any problems that can’t be solved with a flapjack actually.

The phrase “the big light” to refer to an overhead light is one of those sayings that I only recently appreciated the weird regionality of.26 August 2017

And it’s not just the regionality of it that’s weird, but also the more you dissect the phrase, the more wrong it feels from a purely semantic viewpoint.

My latest quest is for the perfect alarm clock. It’s getting unhealthy.8 September 2017

For more details on this quest:

You’ll be pleased to know that it has a very satisfactory outcome.

I also tried to start a trending hashtag:

As you can probably imagine, it didn’t take off. But at least I tried.

Just give it up already!

I’ve got this new pet millipede
I keep it in a vase
I’d tell you more about it
But I don’t have enough chars.27 September 2017

Returning to the funny poetry to try and get some attention, but this one apparently just didn’t cut the mustard.

Still trying to make that one work, huh? 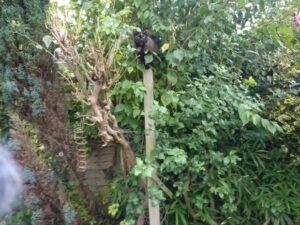 Ah, going back to cat photos. Probably not a bad idea.

The boy seems to mix up Hugh Bonneville and Bill Murray, with hilarious consequences.16 November 2017

When I say “hilarious”, of course, you know what I mean.

A nice plan to do some low-stress, relaxed car shopping is somewhat undermined by my existing car deciding to adopt a throaty exhaust sound this morning. Stoopid car.25 November 2017

Our old Vauxhall Astra, which we bought with 50k miles on it and which had served us so well for 13 years, was starting to show its age. It was a good car.

I have used
The last of the toilet paper
That was sitting
In the bathroomThat you were
Probably saving
For a colossal
Shit later on.

This is my sort of bandwagon. And I get to use the word “quilty” which is never a bad day.

This dog has started following us and we don’t know what to do. 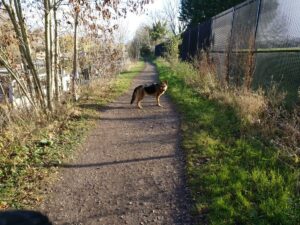 This was while we were walking the Thames Path. A dog started walking along with us. Which sounds adorable, right? The problem is that after a little while you encounter some people coming the other way, and the dog starts to give them attention, and they give you a look that says “you are irresponsible dog owners, that mutt should be on a leash” and you’re yelling “THAT’S NOT MY DOG IT IS JUST FOLLOWING ME”. Awkward. After a few miles, the dog attached itself to some other people and started following them back towards the west.

If you want to piss yourself laughing, search for ASMR on YouTube.2 December 2017
Someone should make a website which redirects you to either a ASMR video or a shrieking gamer at random.2 December 2017

Sometimes I get comments on my videos on YouTube in which people suggest that I should be doing ASMR. I think that it’s a combination of having an English accent, and not being an insufferable whooping arsehole. That seems to be all it takes.

There’s a drunk guy here setting the world to rights. I don’t want to excite everyone unnecessarily, but I think he might have all the answers.16 December 2017

No, it wasn’t me. Though I think I probably wasn’t completely sober, as the ensuing tweets will indicate:

I find myself sometimes wondering if bus drivers maybe aren’t 100% infallible.16 December 2017
Hey I think I might be the only person on this bus! It’s just like a really really big taxi!16 December 2017
Seriously though no shit they should pay me to do the recorded platform announcements. I could blow that shit outta the fuckin water.16 December 2017
By which I mean I’d be very very good at it, for those of you unfamiliar with my young peoples’ vernacular.16 December 2017

Find your plumber name by taking your full name and adding “Plumbing Services” to the end.16 December 2017

Two people liked this. They have taste.

Maisy, I hope you’re not getting any ideas. 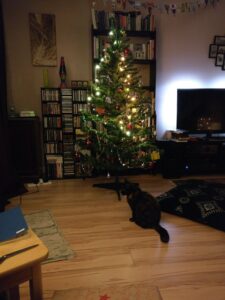 Of course she’s thinking about it.

I wish I was clever enough to come up with my own clock jokes, but all the ones I know I heard second hand.16 December 2017

I hope this was an original joke, but even if it wasn’t, that’s kinda funnier still. Check out those 5 likes and 1 retweet though!

Tumbleweeds. And now for the final tweet of the year…

Two likes. I guess you had to be there.